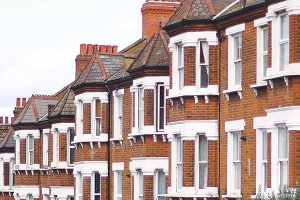 Tremors are continuing to ripple through the UK mortgage market despite the Bank of England’s intervention to calm financial turbulence.
Higher borrowing costs for lenders means the average monthly cost of a two-year fixed-rate mortgage will rise by 70% by March from January this year, Bloomberg Economics estimates. The cost of a two-year fixed-rate mortgage on an average-priced home will rise to about £1,325 ($1,468) at the end of the first quarter from about £779 last January, according to Niraj Shah, an economist at Bloomberg Economics.
A dramatic rise in swap rates after markets were roiled by the mini-budget suggested banks would have to substantially increase the cost of home loans in the coming weeks. Lenders have responded by pulling more than 1,620 mortgage products, the equivalent of 40% of the market, according to Moneyfacts Group Plc.
“There will be a continued period of short-term instability whilst mortgage lenders understand what their real cost of borrowing is,” Charlie Bryant, chief executive officer at property portal Zoopla Plc, said in an interview with Bloomberg Radio. “That will undoubtedly then filter through in the mortgage rates that we as consumers pay.”
Mortgage lenders are holding their fire before jumping back in. The Family Building Society, which pulled its fixed-rate product “incredibly reluctantly” last week, is among those remaining wary, Chief Executive Mark
Bogard said in an interview.
“The BOE clearly went some of the way to bringing rates down a bit and steadied people’s nerves but we’re in the invidious position of having no fixed-rate product to sell,” he said by phone. “If we’d produced another set of products yesterday morning then by the afternoon they’d have become too expensive.”
Average two-and five-year mortgage deals are priced above 4% but the yield on two-year interest-rate swaps, which lenders typically use to price mortgage products, reached nearly 6% this week, the highest level since the financial crisis in 2008. Rising rates threaten to stretch affordability and potentially cause home deals to fall apart.
To bolster the market, the government announced it would cut stamp duty. There are few signs that it’s having an impact.

Virgin Money announced that it was hiking prices from Friday, with residential two-, five- and 10-year fixed-rate deals now starting at 5.29%. Virgin was advertising two-year mortgages at between 4.15% and 4.99%.
The Building Societies Association said lenders are acting in response to a short-term dislocation. Firms “remain committed to the mortgage market, and whilst we cannot predict when, will be looking to act once they can be assured that the turbulence has subsided,” a spokeswoman for the BSA said by email.
To bolster the market, the government announced that it would cut stamp duty. There are few signs that it’s having an impact.
The surging cost of borrowing will undermine the ability of first-time buyers to purchase properties, meaning the price of new-build homes could fall 15% in 2024, Ami Galla, a director at Citigroup Inc., said in an email. Completions could fall by as much as 30% that year, she said.
Shares in homebuilders including Berkeley Group Holdings Plc and Persimmon Plc are down more than 9% since Friday despite the sales tax change.
The last two housing crashes began in London before spreading out from there, according to Danny Dorling, professor of human geography at the University of Oxford, who researched the U.K. property crash in the 1990s. All six of the most expensive boroughs in London saw price falls in July 2022 compared with a year earlier, according to researcher Acadata Ltd, with average values “considerably lower than their previous record levels,” he said.
“All we do know is that there always eventually is a bump” downward in prices, Dorling said, “and that in the long term house prices do tend to return to affordable levels — eventually.”