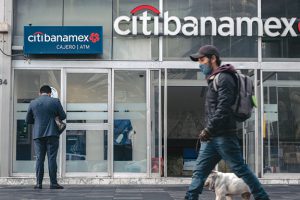 Citigroup Inc.’s Mexican unit, Banamex, is likely to attract offers of about $7 billion to $8 billion as the field of bidders narrows, according to people familiar with the matter.
Grupo Financiero Banorte, Carlos Slim’s Grupo Financiero Inbursa, mining tycoon German Larrea and Grupo Financiero Mifel are still in the running.
Slim, with a net worth of $73.5 billion, and Larrea — who when combined with his family has about $24.3 billion, according to the Bloomberg Billionaires Index — are Latin America’s two richest people.
The sale process remains underway and offers for the unit may change.
New York-based Citigroup launched the sale of its retail Banamex unit at the start of the year after its share of Mexican deposits dropped nearly 10% in the two decades since the 2001 purchase of Banco Nacional de Mexico. Banorte, which is Mexico’s second-biggest bank by total loans, trailing only Banco Bilbao Vizcaya Argentaria, has been seen as top contender for Banamex.
Banco Santander SA said on July 22 it was eliminated from the bidding process. A $6 billion offer from Spanish bank was rejected by Citigroup
The sale process has been sluggish. Meanwhile, Citigroup has considered a deal to buy Deutsche Bank AG’s Mexican unit to more quickly obtain a license for operations there focused on institutional clients and private banking.
Citi is well into sales process and is working through regulatory and legal issues, CEO Jane Fraser said on a conference call discussing bank’s second-quarter results. Fraser said franchise is “more than maintaining its value” as they work to separate the businesses that are up for sale from what they want to keep in Mexico.
Frank Aguado, the head of investor relations at Inbursa, said last week that the company is interested in purchasing Banamex only at a “reasonable” price. He told analysts on a call that Inbursa is inviting other Mexican businessmen to join its bid, but that there is no set group yet.
Larrea, who controls Grupo Mexico, a copper miner, has hired Grupo Aeromexico SAB Chairman Javier Arrigunaga as well as Pedro Aspe to advise him, the people said. Aspe served as Mexican finance minister when Banamex and other lenders were re-privatized in 1991 after being nationalized during a financial crisis a decade earlier.
Arrigunaga had led Citibanamex from 2010 until he stepped down in 2014 amid the fallout of allegations of $400 million in fraudulent loans to oil-services provider Oceanografia SA. Oceanografia denied wrongdoing and noted that ongoing cases have yet to lead to any ruling against the company since they were first brought in 2014.
The two join as advisers along with Barclays Plc, which Bloomberg previously reported was helping Larrea with his bid.