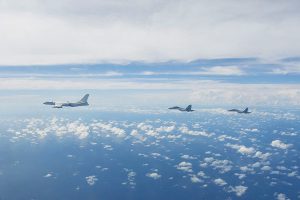 China used US House Speaker Nancy Pelosi’s visit to Taipei as a pretext to prepare for a possible Taiwan invasion and expand its control throughout the region, the island’s foreign minister said, adding Beijing had been planning the move for some time.
China’s recent military drills in the seas and air around Taiwan were aimed at changing the status quo in the Strait, Joseph Wu said at a briefing in Taipei on Tuesday, adding that the activity fueled concern Beijing may proceed with an actual invasion.
“The median line of the Taiwan Strait has kept the status quo in the strait for decades, and it’s a symbol of the status quo in the strait,” said Wu. “This fact has been harmed for the past few days due to the Chinese drills, which affect regional peace, stability, and especially Taiwan’s security.”
China’s ambitions don’t stop at Taiwan, Wu warned. Beijing is determined to exert control over the East and South China seas at either end of the Taiwan Strait, making the whole area its internal waters, he added. “I’m sure these Chinese activities are making our friends like Japan very nervous and making our Southeast Asian friends very nervous as well,” he said. “We are in the same boat.”
Chinese Foreign Ministry spokesman Wang Wenbin called the ongoing drills a “warning to the provocateur,” at a news briefing in Beijing on Tuesday, in a veiled reference to the US which China blames for inflaming current tensions. He declined to say whether such military exercises near Taiwan were a “new normal.”