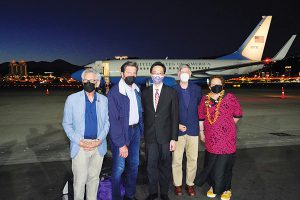 China’s military said it held fresh patrols around Taiwan to “fight back” against another US congressional visit less than two weeks after House Speaker Nancy Pelosi traveled to Taipei.
The patrols and exercises conducted in the “sea and air space around Taiwan” on Monday provided a “resolute response and stern deterrence to US-Taiwan collusion,” Chinese Defense Ministry spokesman Senior Colonel Wu Qian said in a statement. Taiwan’s Ministry of National Defense said Monday that it detected 30 Chinese military planes and five warships around Taiwan’s surrounding region.
The move came as a delegation led by Senator Ed Markey, a Massachusetts Democrat, continued a two-day visit to the democratically governed island.
Unlike earlier this month when China conducted live-fire exercises and likely fired ballistic missiles over Taiwan’s main island, Beijing didn’t immediately specify exclusion areas for commercial planes or ships to avoid. Chinese naval vessels and warplanes have regularly breached the US-drawn median line that divides the Taiwan Strait since Pelosi’s arrival on August 2.
Markey’s delegation was expected to meet Taiwanese President Tsai Ing-wen, Foreign Minister Joseph Wu and local lawmakers, according to a Foreign Ministry statement. The two sides intended to discuss regional security, trade and investment, global supply chains and climate change, according to the American Institute in Taiwan, the de-facto US embassy.
Along with Markey, the delegation includes Democratic Representatives John Garamendi and Alan Lowenthal — both of California — and Don Beyer of Virginia. Representative Aumua Amata Coleman Radewagen, a Republican delegate from American Samoa, also took part.
The delegation will reaffirm US support for Taiwan and “encourage stability and peace across the Taiwan Strait,” Markey’s office said in a statement. Meetings were planned with political and business leaders to discuss topics including investments in semiconductors, according to the statement.
The president’s office in Taipei said in a statement that the two sides hope to sign a double-taxation avoidance agreement, adding the CHIP Act would provide more incentives for Taiwan’s semiconductor industry to invest in the US.
Pelosi’s stopover in Taiwan drew a strong response from China, which conducted its most provocative military drills in decades in the wake of her visit. Beijing denounced the trip as a violation of the US pledge decades ago not to formally recognize the government of Taiwan, which China claims as its territory.
While Pelosi was the highest-ranking US official to make it to Taiwan in a quarter century, visits by other members of Congress have been common for decades. During her meeting with the Taiwanese leader, Pelosi recalled that several US senators, including the chairman of the Foreign Relations Committee, Democrat Bob Menendez, had visited this year without drawing a firestorm of criticism from Beijing.
Chinese Foreign Ministry spokesman Wang Wenbin nonetheless said Monday that Markey’s visit “blatantly violates” the country’s “One China” understanding with the US. “China will take resolute and strong measures to defend its national sovereignty and territorial integrity,” Wang said.
“The handful of US politicians who have been colluding with Taiwan independent separatist forces and attempting to challenge the One China principle, they are overestimating themselves and are doomed to fail.”