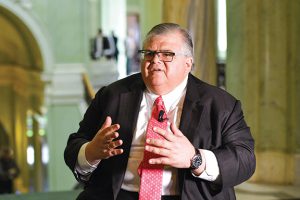 There’s a narrow path for the world’s central banks to stem rising inflation without tipping their economies into a recession, according to the head of the Bank for International Settlements (BIS).
“There is a possibility that it can be pulled off without a major impact — with an impact on GDP but not going all the way to a recession,” Agustin Carstens told Bloomberg TV on Monday in an interview. “But this is a narrow path and we cannot dismiss the possibility of a hard landing.”
The BIS warned this week in its annual report that the world risks entering a new era of high inflation that central banks must keep in check. Policy makers are more likely to be able to tame prices without sparking an economic downturn if they tighten monetary policy “in a timely and
decisive fashion,” it said.
Last week, Federal Reserve Chair Jerome Powell acknowledged that steep interest-rate hikes could tip the US economy into a recession, calling a soft landing “very challenging.”
Carstens said central banks “are at the beginning of the effort of turning the inflation around,” calling efforts to date “so far so good” but saying there’s still “some ways to go.”
“The good thing is monetary policy has started to act in a forceful way,” he said. Looking ahead, the most important thing is “for the actions of the central bank to persist and act forcefully in a flexible way.”