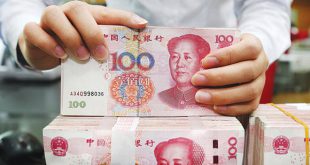 Nigerian policy makers may be about to loosen their stranglehold on the nation’s currency.
The central bank of Africa’s biggest economy will decide on Tuesday on whether to adjust borrowing as evidence mounts of a looming recession. Barclays Plc, Goldman Sachs Group Inc. and Renaissance Capital Ltd. are among banks predicting it will also introduce a de facto devaluation of the naira, or even a gradual removal of capital controls that have choked the economy of dollars needed to pay for imports from fuel to soap.
While President Muhammadu Buhari has opposed abandoning the naira’s peg of 197-199 per dollar since coming to power a year ago, his deputy Yemi Osinbajo announced a policy review on May 11 that “may feature” a devaluation. On the same day, officials allowed fuel importers to buy dollars from the black market, saying the central bank couldn’t provide enough.
Foreign reserves have plummeted to their lowest in more than 10 years and the black market exchange rate has sunk to around 345, while naira forward contracts are pricing in about a 20 percent devaluation to 248.5 in three months.
“Will they devalue? On the back of what the vice president said, it seems likely,” Ridle Markus, a Johannesburg-based analyst at Barclays’ Africa unit, said by phone on May 19.
“But they need to go full-out. That means that not just devaluing and hiking the policy rate, but also dropping their restrictive foreign-exchange controls. That’s the only way investors will regain confidence,” pointed out Marcus.
Consumer inflation near a six-year high may also prompt Governor Godwin Emefiele to increase borrowing costs. Eighteen of 20 economists in a survey predicted an increase in the policy rate of between 50 and 250 basis points. Two forecast it will stay unchanged at 12 percent.
The economy contracted in the first quarter, shrinking by 0.36 percent as manufacturing, oil output, financial institutions and real estate declined, data showed. Even before the figure was released, growth was forecast at 2.3 percent this year, the slowest pace since 1999, in large part because of the currency curbs, according to the International Monetary Fund.
Investment Slows
Foreign investment in Nigeria’s stocks and bonds have slowed to a trickle as the prospect of a devaluation and currency-trading restrictions deter buyers.
Nigerian equities are down 5.3 percent this year, compared with a 0.2 percent loss for the MSCI Emerging Markets Index of stocks. Local government bonds have lost 9.8 percent, making them the only local-currency securities not to have gained among 31 emerging markets monitored closely.
Last week’s decision to increase gasoline prices by 67 percent to 145 naira ($0.73) a liter and give retailers more freedom to source foreign currency was a sign the central bank is considering a multiple exchange
system, according to Goldman Sachs and Renaissance. They believe it may soon announce plans to let some
companies to buy dollars at an exchange rate weaker than the official one. Vice President Osinbajo said the government had used a rate of 285 per dollar to calculate the new gasoline price.
“Following the deregulation in the fuel market, we expect a two-tier foreign-exchange regime of some sort,” Yvonne Mhango, an economist at RenCap, said by phone from Johannesburg on May 19.