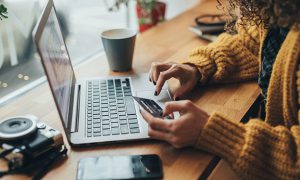 The UK government is tightening rules on buy now, pay later loans to try to prevent borrowers from taking on unaffordable debts.
After months of consultations, the Treasury confirmed that lenders will be required to carry out affordability checks on customers and ensure advertisements are fair. Providers will need to be approved by the Financial Conduct Authority and borrowers can take complaints to the Financial Ombudsman Service.
The rules will take time to change. The government aims to lay secondary legislation by mid-2023, after which the FCA will consult on its regulation. It comes as companies from Apple Inc to Klarna Bank AB race to offer shoppers the chance to pay for small items in installments, which are interest-free if they pay on time.
“By holding buy now, pay later to the high standards we expect of other loans and forms of credit, we are protecting consumers and fostering the safe growth of this innovative market in the UK,” said John Glen, economic secretary to the Treasury.
The government also confirmed that other forms of short-term interest-free credit, such as paying for dental work or larger items like furniture, will be required to comply with the same rules. With inflation at a 40-year high, UK regulators last week told lenders of all forms they need to offer more support to struggling borrowers.