Bosnia may get EU candidacy status at summit next week 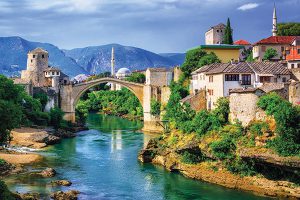 European Union (EU) leaders may grant Bosnia-Herzegovina official candidacy status as early as December 15’s summit in Brussels, according to people familiar with the plan.
The move, the next step on the long path towards membership which would require approval of all 27 EU member states, would be a major boost for Bosnia. It’s still grappling with the fallout from the Balkan wars of the 1990s, which the US-brokered Dayton accords in 1995 brought to an end.
Bosnia is split into two competing areas — the Serbian-dominated Republika Srpska and a Muslim-Croat led region. They are frequently at loggerheads over issues from the size of the military to the budget and land reform, though they’ve avoided an escalation into armed conflict.
The EU has helped to keep a lid on tension by dangling the possibility of membership, which has been delayed by Bosnia’s slow progress on reforms.
Zeljka Cvijanovic, the Serb member of Bosnia’s collective, three-person presidency, said that giving the country candidacy status would send a message “to the whole region that no one is left behind.”
“We have such expectations and we have certain promises,” Cvijanovic told reporters at an EU-Western Balkans summit in Tirana. “I regret that that didn’t happen much earlier.”