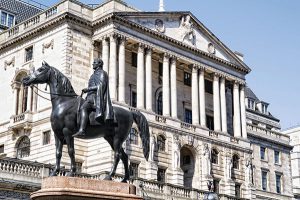 The Bank of England (BOE) delivered an unusually apocalyptic economic outlook at last week’s quarterly economic review, overshadowing the biggest interest-rate hike in more than a quarter of a century. Yet UK markets have barely moved, and their skepticism is entirely understandable and completely justified. Like a bad pianist playing the right notes but not in the correct order, the central bank’s doom-mongering has fallen on deaf ears among traders who reckon its forecasts are an exercise in futility given the fiscal splurge that’s coming from whoever becomes the next prime minister.
The BOE now expects inflation to peak at 13.3% this year, with annual price gains still close to 10% in a year’s time. The real shocker, though, is its long recession forecast, with no growth expected for almost two years and an overall contraction in gross domestic product of more than 2%. Unemployment is expected to rise by two-thirds from its present 3.8% level.
The BOE echoed its peers at the Federal Reserve and the European Central Bank by scrapping forward guidance. Rather than steering market expectations for the future path of interest rates, decisions will be made meeting by meeting. That hardly instills confidence in policy makers’ ability to divine the economic outlook, and it also risks increasing market volatility in the coming months.
The crucial flaw is that the BOE’s predictions can’t take into account any tax cuts that are not yet official government policy. So even though Liz Truss, the frontrunner to replace Boris Johnson as prime minister, has promised immediate fiscal relief worth about £40 billion ($49 billion), and rival candidate Rishi Sunak is also promising to shake the magic money tree, that prospective largesse doesn’t figure in the central bank’s models.
Governor Andrew Bailey declined to answer any questions which strayed into the political arena. But with the BOE’s own forecasts showing inflation almost seven times faster than its strict 2% target, there are some fraught times likely ahead in the relationship between the UK government and its central bank.
“The bank may be politically independent, but it is not independent of politics,” as Panmure Gordon’s Chief Economist Simon French commented in a recent Times article.
Truss has repeatedly highlighted that the BOE’s mandate would be reviewed under her administration. Having such a prescriptive target has become a rod for the BOE’s back and, within reason, it should welcome change. As I argued in February, flexibility can improve its effectiveness.
A switch to targeting nominal gross domestic product is one potential solution. That would be a seismic change, however, discordant with most other major central banks and harder to explain to non-economists.
Scrapping the inflation target entirely seems unlikely; such a radical move would grab the attention of sterling traders, and not in a good way.