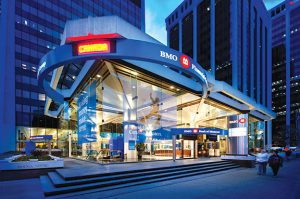 Bank of Montreal (BMO) agreed to buy BNP Paribas SA’s Bank of the West unit for $16.3 billion, extending its presence in key US growth markets and giving the French lender a windfall before its new strategic plan.
BMO will fund the transaction, which should add 1.8 million customers upon closing next year, in cash and mainly with excess capital, according to a statement.

Bloomberg had previously reported Canadian bank’s interest.
For BMO, the transaction — its largest acquisition ever — extends its retail footprint into the western US while also bulking up its already-sizable commercial business. The bank, Canada’s fourth-largest by assets, already has a significant presence throughout the Midwest US from its acquisition of Harris Bankcorp in the 1980s and a takeover of Marshall & Ilsley a decade ago.
BNP Paribas will use proceeds from the sale for stock repurchases, investments and bolt-on deals, the Paris-based bank said. The deal will generate a net capital gain of about 2.9 billion euros ($3.3 billion) and add about 170 basis points to the lender’s CET1 ratio.
BNP plans to make an extraordinary distribution to shareholders via a buyback to compensate for diluted earnings per share. That could be around 4 billion euros, it said. BNP expects to deploy a further 7 billion euros through organic growth, technology investments and bolt-on acquisitions.
The transaction adds to a series of exits from US banking, as foreign lenders take advantage of regional banks’ thirst for deals in their ambition to compete with the retail businesses of Wall Street giants. In 2020, Banco Bilbao Vizcaya Argentaria SA sold its US banking operations for $11.6 billion, followed this year by MUFG Bank NA, which sold its US franchise for $8 billion.
“This acquisition will add meaningful scale, expansion in attractive markets, and capabilities that will enable us to drive greater growth, returns and efficiencies,” BMO Chief Executive Officer Darryl White said.
US bank valuations, already inflated by the current wave of consolidation, have also got a boost from the US Federal Reserve’s hawkish pivot aimed at reining in inflation. In Europe, meanwhile, banking consolidation has been on ice: higher capital requirements are an impediment for large cross border deals, even as markets remain fragmented
BNP’s 900-million euro share buyback program ended in December and the bank is due to update targets and potentially announce new capital return plans early next year. Italy’s UniCredit SpA saw its shares jump earlier this month after Chief Executive Officer Andrea Orcel announced a huge new buyback program.