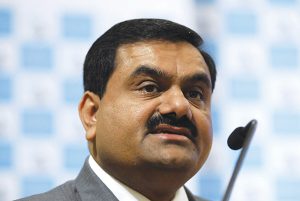 Adani Enterprises Ltd., the flagship firm of Asia’s richest person, is considering issuing at least $1.8 billion in new shares, according to people familiar with the matter.
Billionaire Gautam Adani’s conglomerate is working with advisers on the follow-on issue and could sell the shares as soon as next year, the people said, asking not to be identified as the information is private. The sale could raise as much as $2.4 billion, one of the people said.
The issuance will test investor appetite for a stock that has had outsized gains, compounded by lower liquidity relative to peers and sparse analyst coverage. The conglomerate has previously attributed the small free float to the Adani family holding about 75% of Adani Enterprises, and earlier this year said it is working on plans to increase the free float.
Shares in Adani Enterprises have surged 132% in the year to date, giving it a market value of about $55 billion. India’s NSE Nifty 50 index — it added Adani’s flagship in the gauge in September — has risen just 5.1% over the same period. Adani Enterprises is trading at a valuation of 164 times its one-year forward earnings. By comparison, Nifty is trading at a multiple of about 20 times and Reliance Industries Ltd. —India’s largest firm by market value — at about 21 times, according to data compiled by Bloomberg.
Deliberations are ongoing and details of the fundraise including size and timing could still change, the people said.
Representatives for Adani Enterprises declined to comment. The company’s board will meet Nov. 25 to discuss raising funds, the company said in an exchange filing.

Tackling Debt
The ports-to-power conglomerate is entering businesses “with a mindset to dominate” those sectors, making its stocks “a really good proposition” in the longer term, according to Mohit Nigam, a fund manager with Jaipur-based Hem Securities Ltd. “Only problem is debt and that is why foreign, domestic institutional investors initially hesitated in entering Adani stocks,” he said. “But, those who invested made really good returns.”