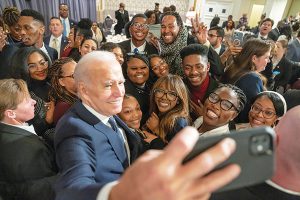 Joe Biden’s deputy chief of staff, Jen O’Malley Dillon, has ruled out returning as campaign manager for the president’s planned 2024 reelection bid, people familiar with the matter say.
O’Malley Dillon, who served as campaign manager for his 2020 effort, will stay at the White House rather than reprise the role, the people said. She’ll still be closely involved with political strategy discussions.
Her intent to remain at the White House comes as Biden faces a shuffle of top figures, including Chief of Staff Ron Klain’s coming departure.
Another potential change looms with Mike Donilon, one of Biden’s closest aides and confidantes among the staff, considering whether to shift to the campaign, one of the people said. No final decision has been made.
Taken together, the movements and preparations signal that the reelection announcement is all but a certainty and that the president — who retains his preference for longtime, familiar advisers — isn’t readying rare changes to his tight orbit. But the moves come as the administration prepares to navigate a divided Congress, a campaign launch and fallout from the investigation into classified documents found at the president’s private home and office.
Biden’s inner circle won’t be breaking up, even if some of them ultimately shift to the campaign. One person familiar with the matter said that, in addition to O’Malley Dillon and Donilon, senior aides including Anita Dunn, Steve Ricchetti, Bruce Reed and Louisa Terrell will continue to advise Biden and serve as architects of his efforts — whether in the White House or outside it.
Klain will also remain among Biden’s coterie, similar to the influence of former White House aide Cedric Richmond, the person said.
Klain will depart in the coming weeks, after serving as Biden’s chief of staff since his inauguration. He’ll be replaced by Jeff Zients, who undertook a series of roles for Biden and for Barack Obama, including as Covid czar early in Biden’s administration.

Calming Influence
Zients also served previously as director of the National Economic Council under Obama. The current occupant of that role, Brian Deese, is said to be preparing to leave. Zients’s presence as chief of staff could smooth any disruption from that changeover of a top economic aide.
Dunn, who left a White House role before returning last year, is also expected to remain a key figure in shaping Biden’s message and political push. She was among the top candidates to replace Klain, the people said.
The turnover is, in some ways, a long time coming for Biden, who habitually is slow to trust newcomers. Zients led an effort to prepare for departures among senior aides and cabinet figures, identifying potential successors to minimize the disruption of personnel changes.