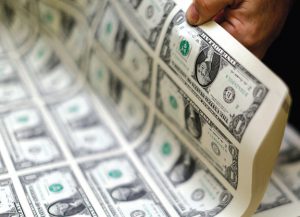 The dollar’s best days might still be ahead of it.
While the greenback has tumbled as riskier assets have rebounded and demand for havens has ebbed, there’s potential for renewed political and economic risks to rekindle its strength. Add to that a dire outlook for Europe and prospects for even more policy tightening by the Federal Reserve, and there’s scope for the US currency to bounce back and eclipse the highs it reached in mid-July.
The Bloomberg dollar index, which measures the currency against a basket of major developed- and emerging-market peers, has dropped around 3.5% from the unprecedented high it reached on July 14. Its decline was turbocharged this week as softer-than-anticipated US inflation data took some of the air out of Fed rate-hike bets, dragging down front-end Treasury yields and boosting stocks. But some observers, pointing to both growth and inflation risks, are doubtful that kind of dollar-negative situation can last.
“I am not convinced we are past peak recession fears,” said Bank of Montreal’s global head of currency strategy Greg Anderson. While he concedes that July might very well have been the top for the dollar if there aren’t further significant upheavals, “it’s very easy to see some type of a shock in the next three months that brings those fears back to the forefront and the dollar index back up to another high.”
The dollar has declined over the past month against all of its Group-of-10 counterparts, with the Norwegian krone and Australian dollar among those leading the charge against it. But year-to-date it is still up against all those same peers, even after the recent pullback.
A significant part of the recent decline has been the reassessment of expectations for the Fed in light of more moderate inflation numbers. Yet not everyone is convinced that the central bank will be able to temper its tightening path.
“Inflationary pressures are still quite firm,” said Bipan Rai, Canadian Imperial Bank of Commerce’s head of foreign-exchange strategy.
“The Fed is still going to be hiking and the terminal rate is going to end up higher than what the market is pricing in,” he said. And that’s likely to help the dollar restrengthen.
On the flipside, there are still big headwinds ahead for one of the dollar’s most crucial counterparts: the euro. While a plethora of bad news out of Europe appears to have been taking a backseat to the focus on US consumer-price data, concerns about drought, recession and energy shortages could once again come to the fore.
“I suspect in winter with Europe facing the potential for blackouts and food shortages, it’s not the end of euro’s weakness versus the dollar,” said Jordan Rochester, a foreign-exchange strategist at Nomura International in London.