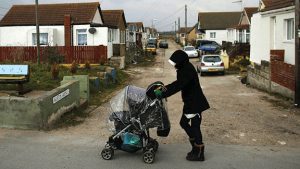 Britain’s poorest households are facing a 3 billion pound ($4.1 billion) squeeze on living standards in April when their benefits will rise by half the expected rate of inflation, the Institute for Fiscal Studies said.
To protect those on low incomes from the looming spike in energy in bills, the government should change this year’s benefit uprating to match the current rate of inflation, the public finances think tank said in an analysis.
Officials are under pressure to help households manage a living cost shock in April, when the maximum energy suppliers can charge customers is due to increase by 50% and the government raises taxes on workers by 12 billion pounds.
Low-income working households will get some protection from an increase in the minimum wage and changes to in-work benefits but those out of work face a severe squeeze, the IFS said.
Benefits will rise by 3.1% in April, as the uprating is based on the consumer prices index from last September. However the Bank of England forecasts inflation will be running at 6% in April. Other forecasters say it could be as high as 7%.
Increasing benefits, including pension credits for retirees, by 6% rather than 3.1% would save around 10 million households 290 pounds each on average and cost the Treasury 3 billion pounds, the IFS said. Extending the support to the state pension would cost another 1.5 billion pounds.
The overall increase in energy prices in April will add 14 billion pounds to household costs on an annualised basis, it added. The average increase in energy bills will be 500 pounds per household.
“The way in which we increase benefits each April is not fit for the period of high and rising inflation we now face,” said IFS Deputy Director Robert Joyce. “It would be preferable to raise benefits by the actual inflation rate in April. Doing so would compensate benefit recipients on average for higher costs, including energy costs.”