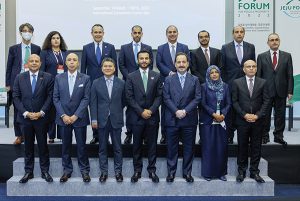 The latest trend in UAE-South Korea bilateral trade shows the strong and resilient economic relations between the two countries, according to the UAE’s top diplomat in Seoul.
“The UAE-South Korea non-oil bilateral trade has grown to $1.3 billion during the first quarter of 2022, a 19 percent increase compared to the same period last year,” Abdulla Saif AlNuaimi, the UAE Ambassador to South Korea, said at Jeju Forum for Peace and Prosperity, held on Jeju Island in South Korea.
Addressing the Arab Ambassadors’ Forum, he said the UAE is the only country in the Middle East that has a Special Strategic Partnership with South Korea, which has helped grow the bilateral relations in all areas, especially in economy and trade.
The UAE-South Korea bilateral cooperation is enhancing in many areas, especially in renewable energy, infrastructure, health and medicine, future-oriented technology and innovation, AlNuaimi explained.
Barakah nuclear power plant and several oil fields are the major projects undertaken by South Korean companies in the UAE, he noted.
South Korean Foreign Direct Investments (FDIs) in the UAE stood at $2 billion as of 2019, the diplomat revealed.
The UAE’s investments in South Korea were to the tune of $637 million as of 2020, especially in major sectors such as oil and gas, real estate, automotive equipment, manufacturing, coal, and entertainment, he said.
Apart from being the regional business hub in the Middle
East and a gateway to major economies in the world, the UAE’s well planned strategic measures have made it an attractive investment destination, the ambassador pointed out.
Over 100 avoidance of double taxation agreements and 67 bilateral investment treaties with major world nations have been a major step, he emphasised.
More than 40 free zones across the country that offers many incentives to investors have been attracting huge flow of FDIs, AlNuaimi revealed.
Tax exemptions, stable exchange rates, 100 percent business ownership without the need of a national agent, long-term visas that include a 10-year long renewable golden visas, also attract investors to the UAE, he said.
Along with AlNuaimi, top diplomats of major Arab countries also participated in the Arab Ambassadors’ Forum at this year’s Jeju Forum. The annual event was launched in 2001 as a platform for dialogue to share visions for peace in the Korean Peninsula, East Asia, and the world, and seek creative solutions through international cooperation.