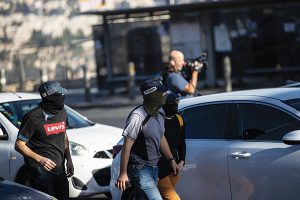 Twin explosions rocked Jerusalem on Wednesday, killing one and wounding at least 14, a sharp escalation after months of growing violence between Israelis and Palestinians.
The first blast detonated near a bus stop at the entrance to Jerusalem on Wednesday morning and a second exploded 30 minutes later near the Ramot junction in the city. Police said they suspected the two attacks were linked.
While no group has claimed responsibility for the blasts, the Gaza-based militant groups Hamas and Islamic Jihad both issued messages of praise. Hamas linked the violence to the Al-Aqsa mosque compound in Jerusalem that Israeli forces entered earlier this year, sparking clashes.
“The Jerusalem attack is the result of the ongoing crimes of the occupation and settlers against Palestinians and the Al-Aqsa Mosque,” Hamas spokesman, Abdel-Latif Al-Qanou said in a statement.
Israel’s outgoing prime minister Yair Lapid said he will convene a security assessment at the Kirya military compound in Tel Aviv later on Wednesday to assess the bombings.
Israel launched a security operation in the West Bank earlier this year, after a spate of deadly attacks against Israelis. There has been a significant increase in violence in Jerusalem and the West Bank since then. More than 130 Palestinians have been killed since the start of the year according to Palestinian health authorities and the United Nations. More than 25 Israelis, including members of the security services, have also been killed.
“We must exact a price for terrorism,” said Itamar Ben-Gvir, a far-right politician who is widely expected to become the country’s next public security minister. He called for a return to a policy of targeted killings in response to the attacks.
We condemn in the strongest possible terms the terrorist attacks that took place this morning on public spaces in Jerusalem..
The US Office of Palestinian Affairs said it was monitoring the situation closely. “We condemn in the strongest possible terms the terrorist attacks,” it said in a statement. “Terrorism is a dead end that achieves absolutely nothing.”