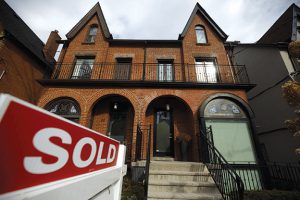 Toronto home prices fell for the third straight month, as rising interest rates spur an abrupt reversal in a city recently at the heart of one of the world’s hottest housing markets.
The average selling price for a home in Canada’s largest city fell 3.1% in May to about $939,000 on a seasonally-adjusted basis, according to data from the Toronto Regional Real Estate Board. Toronto hasn’t seen three consecutive months of price declines since early 2019.
Until recently, Canada had some of the fastest home-price increases in the world, with Toronto and smaller communities in the province of Ontario leading the way as buyers took advantage of low rates and sought more space to work remotely. Now, as the central bank tries to rein in inflation that’s running at 7%, borrowing costs are rising quickly.
Since the beginning of March, the Bank of Canada has raised its key policy rate from 0.25% to 1.5% while signalling even more aggressive increases could be coming. Commercial banks have raised variable mortgage rates in lockstep and buyers have fled the market. The number of home sales fell 9.3% in May from month before, also third straight month of declines on a seasonally-adjusted basis, Toronto board said.
The number of homes for sale in the city jumped 26% last month from May 2021. That combination has allowed the remaining buyers to be choosier, and properties are staying on the market slightly longer — an average of 18 days before being sold, up from 15 a year ago.
The city’s benchmark home price declined 0.3% to C$1.26 million in May, while the number of sales fell below their 10-year average for that month, that report showed.

And in a sign that the Bank of Canada’s rate hikes may be starting to bite in markets outside Toronto and its environs, a separate report from Vancouver’s real estate board showed price gains seem to have stopped there, too. The city’s benchmark home price declined 0.3% to C$1.26 million in May, while the number of sales fell below their 10-year average for that month, that report showed.