Breaking News
Home » Politics » Taiwanese independence is a charging rhino that must be stopped, China says

Taiwanese independence is a charging rhino that must be stopped, China says 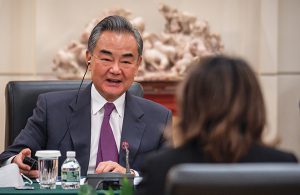 China’s foreign minister compared the drive for Taiwanese independence to a charging rhinoceros that must be stopped in its tracks, and blamed the US for speeding it along.
Foreign Minister Wang Yi said legislation under consideration by US lawmakers threatens the foundation of US-China ties. He said voices advocating the independence of Taiwan, which Beijing claims as its territory, have grown because of US support. He said that ties between the US and China were at a “low ebb.”
“Taiwan independence is like a highly disruptive gray rhino charging toward us that must be stopped resolutely,” Wang said in a speech at the Asia Society in New York, where he was attending the annual gathering of the UN General Assembly. “We have always worked with the greatest sincerity and effort to pursue peaceful reunification, but we will never tolerate any activity aimed at secession.”
China’s authorities have used the term “gray rhinos” in the past to refer to highly probably, high-impact financial hazards that risk being overlooked. They include shadow banking, property bubbles and local government debts.
Relations between Beijing and Washington have deteriorated further since US House speaker Nancy Pelosi’s visit to Taiwan in August triggered the Chinese army’s most provocative drills around the islands in decades. China also halted climate and military talks with US, though the leaders of the world’s two largest economies may meet on the sidelines of international summits taking place in Asia in November.
Although Taiwanese President Tsai Ing-wen’s party was founded on a promise of independence, she has avoided overt moves toward a formal break, saying a legal change is unnecessary because she already leads a sovereign nation. Most Taiwanese residents prefer maintaining the status quo, according to government surveys, with about a quarter supporting independence at some point.