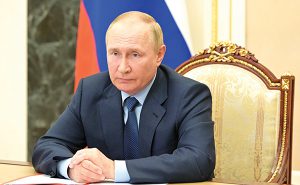 Russian President Vladimir Putin offered to expand relations with North Korea, reaching out to his neighbor as the Kremlin scours the globe for weapons for its war in Ukraine.
Putin sent a congratulatory message to North Korea for its Liberation Day holiday on Monday marking the end of Japan’s 1910-1945 colonial rule over the Korean Peninsula. Although Putin regularly sends messages on the anniversary, this is the first one to be reported in North Korea’s state media since Russia’s invasion of Ukraine in February.
The message said the two countries “would continue to expand the comprehensive and constructive bilateral relations with common efforts,” the official Korean Central News Agency reported. In last year’s message, Putin highlighted World War II cooperation between the Soviet Union and Korean fighters, using similar language to say cooperation would contribute to security.
North Korea, which has a rail link with Russia, has backed Putin’s invasion. It’s one of the few countries to have recognized the independence of the Kremlin-controlled people’s republics Donetsk and Luhansk in eastern Ukraine. North Korea also has been stockpiling artillery for decades, leading some analysts to speculate that it could be a source of armaments for Putin. Russia’s ambassador to Pyongyang said North Korea may be willing to send its workers to the two Russian-controlled breakaway areas in Ukraine, NK News reported last month. North Korea for years has sent its workers to Russia and China, where they earn hard currency desperately needed by Pyongyang.
The US push to isolate Russia over Putin’s war in Ukraine, coupled with increasing animosity toward China, has allowed North Korean leader Kim Jong Un to strengthen his nuclear deterrent without fear of facing more sanctions at the UN Security Council. There’s almost no chance Russia or China, which have veto power at the council, would support any measures against North Korea as they did in 2017 following a series of weapons tests that prompted former President Donald Trump to warn of “fire and fury.”