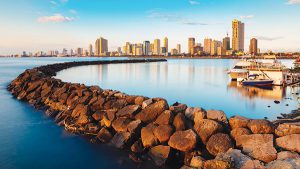 Philippine President Ferdinand Marcos Jr’s economic team lowered its 2023 growth forecast as the global outlook worsens and domestic inflation hovers near a 14-year high.
Gross domestic product will probably expand 6%-7% next year from a previous projection of 6.5%-8%, the Development Budget Coordination Committee (DBCC), which sets economic assumptions for fiscal purposes, said. It left this year’s growth estimate of 6.5% to 7.5% unchanged.
“This momentum is expected to slightly decelerate in 2023,” DBCC said in a statement, “considering external headwinds such as the slowdown in major advanced economies.”
The latest projections come as Marcos nears completion of his first six months in office amid a slew of challenges including soaring prices and borrowing costs and tepid global demand.
Despite the forecast reduction, the Philippines is still seen as among economic growth leaders in Asia.
Inflation is expected to peak this month after the central bank unleashed its most aggressive monetary tightening in two decades to quell the fastest price gains since 2008, as well as shore up the peso. The economic team expects inflation to average 5.8% this year before cooling to 2.5%-4.5% in 2023 and ease back
to the 2%-4% target band through 2028.
GDP is expected to pick-up in 2024-2028 and expand by 6.5%-8%, supported by state intervention in agriculture and electronics industries.
The economic team used an exchange rate assumption of 55-59 per dollar for 2023 from a range of 54-55 this year on heightened global uncertainties and the Federal Reserve’s aggressive policy tightening.
While the peso remains Southeast Asia’s worst performer this year, it has gained about 5% this quarter, along with most peers in the region. The Philippine currency is little changed as of Monday.