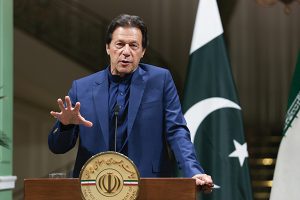 Pakistan’s former premier Imran Khan said his lawmakers are quitting regional legislative assemblies, ending his months-long protest, to mount further pressure for snap elections days after the appointment of a new army chief.
“We won’t be part of this system anymore,” he said at a packed rally in the garrison town of Rawalpindi, an event that he pressed on with despite government warnings of a likely terror attack. “We’re here to put pressure on government, institutions as well to play their role.”
Meetings will be held soon with party lawmakers and leaders to decide how to act upon the decision, he said at his first public appearance without giving many details. The former leader is recovering from injuries sustained in a shooting attack at a similar event earlier this month.
Khan’s Pakistan Tehreek-e-Insaf rules in two of four Pakistan’s provinces.
His announcement came as Prime Minister Shehbaz Sharif appointed General Asim Munir, whom Khan had pushed out from the role of intelligence chief, to the top army job. This elevation could become a possible hurdle to his attempt to force early elections. Munir’s appointment is crucial because the institution wields outsized influence over the country’s politics, having directly ruled the nuclear-armed nation for about half of its history since its creation in 1947.
Khan said all institutions including the military should not cross its constitutional limits as it would be damaging for the country.
Pakistan has been gripped with political tensions since last year after Khan’s relations with the military turned sour amid disagreements over army appointments. Since then, Khan has scaled up his clash with the military and
the government in public speeches.
The flamboyant former cricket star, who has been rallying his supporters to the streets since his ouster from office in April, had resisted the appointment of the army chief, asking that it be put on hold until after snap elections — which he has been demanding and is confident of winning after sweeping several local polls.
The political drama comes as Sharif’s government grapples with economic distress. Inflation has soared and foreign exchange reserves cover about one month of imports, less than the three month benchmark, indicative of the nation’s funding strain.
Any deepening of the political crisis risks further delaying a loan disbursal from the International Monetary Fund and spooking investors ahead of a dollar bond repayment in December.