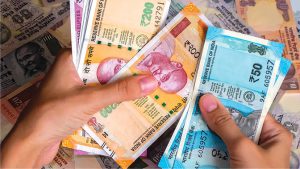 A supply glut is set to hit India’s government bond market, and drive benchmark yields towards 8% by year-end, according to Standard Chartered Plc.
The lender estimates that excess supply of sovereign and state debt may total as much as 6.3 trillion rupees ($81 billion) this fiscal year. That’s likely to further upset a market that’s struggling to cope with rising interest rates and dwindling surplus liquidity, said Parul Mittal Sinha, head of India
financial markets at the bank.
“It may keep becoming incrementally more difficult for supply to be absorbed by the market,” said Sinha, who has spent more than a decade trading currencies and rates in London, Singapore and Mumbai. “Supply worries will increase from July and with interest rates normalising to a higher trajectory and liquidity surplus decreasing — all these three factors can come together.”
Rupee bonds have maintained a semblance of stability amid the selloff in global debt, with recent auctions drawing decent demand as the central bank vowed to ensure the orderly completion of the government’s borrowing program. Still, there are signs that the calm may be shattered after benchmark 10-yields soared to the highest since 2019 last week.
Indian authorities are looking to sell a record 14.3 trillion rupees of bonds this fiscal year as they boost spending to spur growth while tax cuts erode public revenue. To make matters worse, the central bank is expected to hike rates further after 90 basis points of increases in the last two meetings while also mopping up excess liquidity to tame prices that are running above its target band.
StanChart estimates that excess bond supply may total between 3.8 trillion rupees to 6.3 trillion rupees this fiscal year, according to a June 8 note.
All these negatives have fuelled a six-month drop in benchmark 10-year debt, and analysts at Citigroup Inc. are among those who predict that yields may climb as high as 8% from around 7.42% now. They last reached 8% in 2018.
The yield curve is likely to continue bear flattening, with shorter yields rising faster than longer rates, according to Sinha.
“As more and more hikes get delivered, the five-year part of the curve will remain under pressure,” said Sinha. “The longer end demand is growing at a good pace — the 15- to 30-year part of the curve remains well-anchored with demand from insurance companies.”
Local investors who were sitting on excess cash have deployed some funds after yields climbed to the highest in over three years, said Sinha. She added that the RBI was unlikely to carry out another major bond purchase program like it did in the previous fiscal year, when it bought 2.2 trillion
rupees of debt.
“We are not in the camp that expects any big bond purchases from the RBI,” said Sinha. “If inflation cools down and big rate hikes don’t happen, you won’t anyways need to do that kind of intervention.”