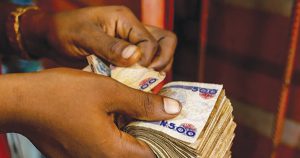 Nigeria’s central bank will allow citizens to swap old naira notes for redesigned bills to boost adoption and circulation of the new currency before the old bills cease to be legal tender at the end of the month.
The central bank of Nigeria in October 2022 announced plans to redesign its highest-value banknotes in a bid to mop up excess cash and rein in inflation.
It gave citizens until January 31 to change their old notes for new ones at banks, with the aim of bringing some of the estimated 2.7 trillion naira ($5.8 billion) that circulates in informal channels into the regular banking system.
The switch has faced challenges, especially in rural areas where people often live far from formal banking services, and also because of the requirements that the old notes be exchanged for new ones by depositing them in bank
accounts.
The cash swap will enable “citizens in rural areas and those with limited access to formal financial services” to exchange a maximum 10,000 naira per person of the old notes through banks or agents without having to open an account, the central bank said. Banks or agents may open wallet or bank accounts for customers bringing in cash in excess of 10,000 naira, it said.