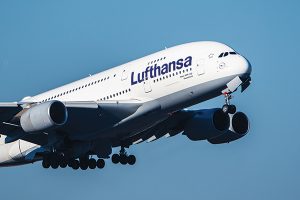 Deutsche Lufthansa AG’s succession options for Chief Executive Officer Carsten Spohr appear less clear after WestJet Airlines Ltd poached one of the German group’s rising-star managers.
Alexis von Hoensbroech quit as chief of the Austrian Airlines division to join the Canadian carrier, he said on his LinkedIn page. Lufthansa said earlier that he had chosen to depart and would be replace by Annette Mann, the group’s corporate-responsibility chief.
His departure comes as a blow to Lufthansa as it seeks to chart a way out of the coronavirus crisis after falling back on government bailouts to survive a collapse in demand. Von Hoensbroech, 51, was well respected within the group and had been tipped as a candidate for the top job were Spohr to depart.
“WestJet is a remarkable success story,” Von Hoensbroech said, adding he would soon be moving to Canada to lead the Calgary-headquartered firm.
Lufthansa is also shuffling other senior management positions, with Jens Ritter becoming CEO of the namesake airline brand as incumbent Klaus Froese returns to flying on the company’s new fleet of Boeing Co 787 jets.