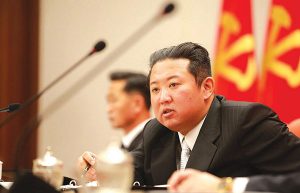 North Korea hit back at US sanctions in response to recent hypersonic missile tests that raised new security concerns, vowing a “stronger and certain reaction” to Washington’s attempt to halt its weapons programs.
The pursuit of the advanced hypersonic missiles system, which are designed to evade existing defenses, is North Korea’s “legitimate right,” the country’s Foreign Ministry said in a statement. Washington’s move to slap sanctions on North Koreans who advanced its nuclear and ballistic weapons programs was a dangerous escalation, the ministry added in a statement released Friday through the state’s official Korean Central News Agency.
A dispatch from the Foreign Ministry is usually reserved for North Korea’s most important messages to the outside world. The statement ratchets up tensions as the Biden administration is pushing Kim Jong Un to return to nuclear disarmament talks stalled for nearly three years. Kim’s regime has shunned overtures for talks, stepped up its production of fissile material for nuclear bombs and tested new systems to deliver atomic warheads.
“The US is intentionally escalating the situation even with the activation of independent sanctions, not content with referring the DPRK’s just activity to the UN Security Council,” the ministry said, referring to the country’s official name, the Democratic People’s Republic of Korea.
“If the US adopts such a confrontational stance, the DPRK will be forced to take stronger and certain reaction to it,” it added.
The heightened tensions between the US and North Korea come after Pyongyang tested two missiles in less than a week designed to deploy a hypersonic glide vehicle that can maneuver at high speeds during an unpowered flight to strike a target. For the first time in nearly two years, Kim oversaw a weapons test when he watched the Tuesday launch of a hypersonic system that North Korea claimed performed “corkscrew” maneuvers and hit a target 1,000 kilometers (620 miles) away.
On Wednesday, the US Treasury Department designated five North Koreans living overseas — one in Russia, and four in China — for aiding the country’s weapons programs.