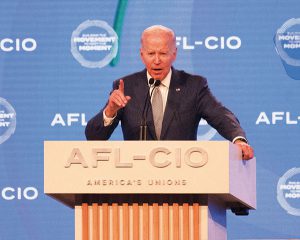 US President Joe Biden’s political fortunes have changed dramatically since his first Group of Seven summit last summer, or even his last visit to Europe in March. It couldn’t come at a worse time for his international allies as Russia settles into a long war with Ukraine.
German Chancellor Olaf Scholz, who will welcome G-7 leaders in the Bavarian Alps, views Biden as a driving force in sustaining pressure on Moscow and believes that unity among allies could fray once again if Republicans win back the White House in 2024, according to a German government official who requested anonymity to discuss internal thinking.
It was only a year ago, on a sandy English beach in Cornwall, when European leaders celebrated that Donald Trump was gone and that the US had returned to the multilateral orbit. Now, that relief has been replaced with a sense of foreboding about whether Biden’s Democrats survive midterm elections and the president’s political longevity.
Several G-7 leaders are concerned that a midterm defeat would limit how much Biden can promise and get done in the months ahead, according to a senior French government official who requested they not be named discussing sensitive matters. As Biden heads into back-to-back European meetings — first the G-7 in Germany and then a Nato summit in Spain — his domestic problems are snowballing.
His presidency has been rocked by inflation and soaring gas prices. At any given moment during his trip, the Supreme Court could issue a ruling that’s expected to overturn the landmark Roe v. Wade decision and end nationwide abortion rights. On Thursday, the justices dealt Biden a setback before he departed for Europe, making it easier for Americans to carry guns in public.
And on the global stage, it’s clear that four months after President Vladimir Putin ordered an invasion of Russia’s neighbour, he has not been deterred by international sanctions and the conflict has settled into a war of attrition.
White House officials expressed confidence in the president’s standing going into the meetings and said he deserves credit for organizing global opposition to Russia’s invasion. The US and its allies are in closer agreement than ever on many issues, including China, energy and supply chains, White House spokesman Andrew Bates said.
“President Biden pledged that he would revitalize America’s standing in the world based on common values, and he has delivered; this is a watershed moment in which our alliances are now the strongest they have been in the post-Cold War era,’’ Bates said in an e-mail. “The president’s leadership has been central in unifying the world to defend democracy and freedom against aggression and brutality.’’
In this new phase, the challenge for the US and its allies is sustaining pressure while averting further damage to their own economies.
Douglas Lute, who served as US ambassador to Nato during the Obama administration, said getting everyone to agree on what to do next for Ukraine will keep getting harder. The economic pain will “frankly test the alliance’s ability to remain unified,” he said in an interview.
Biden’s counterparts at the G-7 have put elections behind them. But he is staring at the prospect of Republicans seizing control of one or both chambers of Congress in November amid mounting speculation about whether he’ll run for re-election in 2024.