India cracks down on opposition protests against rising prices 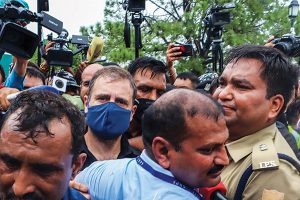 Police swarmed parts of central Delhi and detained some leaders of India’s main opposition Congress party as they took to the streets of the capital to protest against soaring prices and unemployment.
Dressed in black to symbolize their anger, Congress lawmakers, including former party chief Rahul Gandhi, were protesting near the parliament building Friday. His sister and Congress party member Priyanka Gandhi Vadra staged a sit-in protest outside their party headquarters. Both of them were detained by the police. Television visuals showed tense scenes as several policewomen tried to drag Vadra away from the area. News reports said that police had barred gatherings of four people or more in parts of Delhi.
A Delhi Police spokesperson could not be reached immediately for comment.
Addressing a press conference before his detention, Gandhi said the country was witnessing the “death of democracy” and anybody protesting against the government of Prime Minister Narendra Modi found themselves under attack.
The street protests came as India’s central bank delivered its third straight interest-rate increase since May to tame soaring prices and pledged to do “whatever it takes” to bring inflation within its target range.
“Inflationary pressures are broad-based and core inflation remains elevated,” central bank governor Shaktikanta Das said in Mumbai, noting that price gains will remain above the Reserve Bank of India’s 2%-6% tolerance level in the year to March. Tangled supply chains and shortages stemming from the war in Ukraine, coupled with a weakening domestic currency are adding to inflationary concerns in Asia’s third-largest economy.