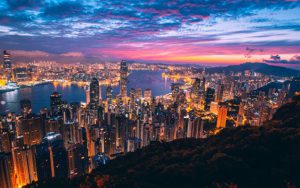 The slump in Hong Kong’s home prices will deepen next year due to the combination of rising borrowing costs, a recession and an exodus of residents, according to Natixis SA.
Residential prices are expected to fall 12% in 2023 and 2% the following year, taking the drop from the peak in late 2021 to 25%, Natixis analysts led by Alicia Garcia-Herrero wrote in a report.
Analysts have grown increasingly bearish on the outlook for the city’s residential property market, which was among the biggest beneficiaries of low global interest rates. Goldman Sachs Group Inc sees home prices falling 30% from last year’s levels, according to a report last month.
Hong Kong’s one-month cost of borrowing has surged to the highest level since 2008 due to the city’s currency peg with the greenback, at the same time as the economy is contracting. Gross domestic product will be 3% lower than its pre-pandemic level by the end of this year, compared with average growth of 6% for the rest of Asia, according to Natixis.
Adding to selling pressure is the dwindling number of
potential buyers and Hong Kong’s fading appeal as a financial hub. The city’s population dropped the most in at least six decades in the 12 months through June as people fled Covid curbs and Beijing’s tightening grip.
“The collapse of immigration and the heated emigration wave have added fuel to the fire,” the Natixis analysts said. “The city’s eroded competitiveness due to the lost years during Covid coupled with investors’ pursuit of diversification to buffer the US-China tensions also affected Hong Kong’s attractiveness.”
There is potential for a more optimistic take. The slump in property prices may prompt the government to take supportive measures, such as cutting stamp duty, which could boost investor confidence, the analysts said. A faster-than-expected reopening of the mainland border would also bolster the market, they said.