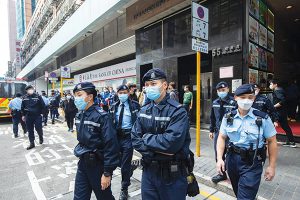 Hong Kong’s biggest remaining pro-democracy news outlet closed after becoming the target of a national security investigation, capping a year of historic strokes by Beijing to silence dissent in the Asian financial center.
Stand News announced on Wednesday on Facebook that it would immediately lay off all staff and cease operations, and take down its website and social media accounts within days. The move came hours after more than 200 police raided the outlet’s newsroom, froze some HK$61 million ($7.8 million) of assets and arrested seven people connected to it on a colonial-era sedition law. They included acting Editor-in-Chief Patrick Lam and Denise Ho, a pop star who had testified about Hong Kong before the US Congress.
Stand News had briefly been the largest Chinese-language media outlet publishing coverage critical of the Hong Kong government after Apple Daily’s closure in July under pressure from a similar probe. The site had braced for police scrutiny, announcing in June that it would purge opinion pieces from its site and stop accepting subscriptions and sponsorships.
The sudden fall of Stand News is the latest in a series of devastating blows to the former British colony’s once-vibrant opposition this year, including the arrests of scores of prominent activists and the election of new legislature vetted by Beijing. The campaign has remade Hong Kong as it prepares to celebrate the 25th anniversary of Chinese rule — halfway through Beijing’s promise to leave the city’s basic policies “unchanged for 50 years.”