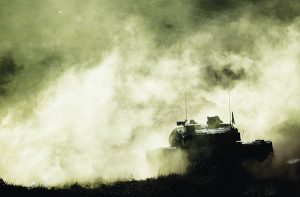 Chancellor Olaf Scholz’s cautious approach to sending Leopard battle tanks – or allowing other countries to export their own stocks of the German-made military vehicles – to Ukraine is confusing allies and creating splits within his own government.
Three Baltic states over the weekend called on Germany as Europe’s leading power to quickly change course. An adviser to Ukrainian President Volodymyr Zelenskiy, Mykhailo Podolyak, was more outspoken, saying that indecision “is killing more of our people.”
Allies have expressed concern that Scholz’s slow decision-making could prolong the conflict and undermine his pledge of pushing ahead with a more assertive German defense policy, described by him as a Zeitenwende, or historic turning point. And over the past week, two of the chancellor’s ministers appeared to contradict the government’s public stance on the issue.
“At this point there are no good arguments saying why battle tanks, why air defense systems can’t be provided,” Latvian Foreign Minister Edgars Rinkevics told reporters ahead of a Jan. 23 meeting of EU foreign ministers in Brussels. “The argument of escalation doesn’t work because Russia keeps escalating.”

Spring Escalation
With Ukrainian and Nato officials expecting a possible intensification of the fighting this spring, Kyiv has been pleading for Germany and allies to send the modern battle tanks, which could help Ukrainian forces both defend their land and regain lost territory by breaking through Russian front lines.
German law requires approval for the re-export of military equipment, meaning the hundreds of Leopard tanks in Europe can only be sent to Ukraine with Berlin’s permission.
Germany’s new defense minister, Boris Pistorius, said on Friday that Berlin could move quickly if an agreement with other countries is reached and added that allies could start training Ukrainian soldiers on the vehicles. Eleven months into the war, Germany will begin taking inventory of how many Leopards are available, so Berlin can move swiftly if it decides to ship them, Pistorius said in an interview with public broadcaster ZDF on Tuesday.
“Because if a yes comes, which could happen in the next few days, this is necessary to allow us to act quickly and begin with training,” Pistorius said.
One of the reasons for Scholz’s cautious approach on sending new categories of heavy weapons to Ukraine is his insistence that Germany will avoid any unilateral decisions and will always act together with its allies, with US backing a crucial element.
“We never go alone,” Scholz said in an interview last week with Bloomberg News Editor-in-Chief John Micklethwait.
The chancellor has pledged to continue shipping more heavy weaponry to Ukraine, but he has also stressed Germany and its allies must avoid an open conflict with Russia that could lead to a nuclear war.
“We need to do everything to avoid a direct military confrontation between Nato and a heavily armed superpower such as Russia, a nuclear power,” Scholz told Der Spiegel magazine in an interview last year. “I will do everything to avoid an escalation that could lead to World War III – there can be no nuclear war.”
Until recently, German officials always made clear in private conversations that Germany would only send or allow others to deliver the German-made Leopard to Ukraine if the US provides its M1 Abrams main battle tank. But Berlin has since changed course and now says there is no link between sending Leopards with the US equivalent.