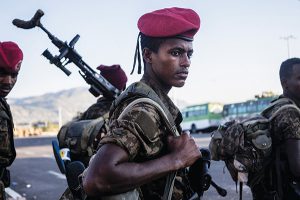 Ethiopia’s government accepted an invitation by the African Union to talks about ending the nation’s two-year civil war.
The continental body invited Ethiopia’s government and dissident Tigray fighters to talks in South Africa scheduled for October 8, according to a copy of the letter seen by Bloomberg that was verified by an African Union official. South African Department of International Relations and Cooperation spokesman Clayson Monyela didn’t immediately respond to a request for comment sent by text message.
“The government of Ethiopia has accepted this invitation, which is in line with our principled position regarding the peaceful resolution of the conflict and the need to have talks without preconditions,” Redwan Hussien, the national security advisor to Ethiopian Prime Minister Abiy Ahmed, said in a statement on Twitter on Wednesday.
Getachew Reda, a senior member of the Tigray People’s Liberation Front that is fighting Abiy’s government, didn’t immediately respond to a request for comment sent by text message.
Conflict between Ethiopian government forces and dissident Tigrayan fighters resumed in August after a five-month lull. The renewed fighting threatens to stymie efforts by Ethiopia’s government to improve relations with international financiers, as it awaits an International Monetary Fund loan amid efforts to restructure its debt.
Yields on Ethiopia’s $1 billion of eurobonds due in 2024 have more than doubled this year to trade at 45.38% on Wednesday.
US Special Envoy for the Horn of Africa Mike Hammer travels to Kenya, South Africa and Ethiopia this week to help efforts to implement a cease-fire and support the start of the African Union-led talks, the State Department said Oct. 3. Hammer’s visit takes place amid reports of continuing hostilities in Tigray, where residents are facing shortages of food and humanitarian supplies.
Tigray state television reported on Tuesday that an air strike hit a camp for internally displaced people in the region, killing at least 57 civilians and injuring several others.
The assault took place near the town of Adi Da’ero, about 32 kilometers (20 miles) from the Eritrean border, the TPLF’s Getachew said on Twitter.