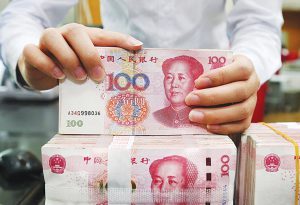 China’s financial regulators told the nation’s biggest state-owned banks to extend at least 600 billion yuan ($85 billion) of net financing to the embattled property sector in the final four months of this year, according to people familiar with the matter, in their latest attempt to address a deepening liquidity crisis.
The People’s Bank of China (PBOC) and the China Banking and Insurance Regulatory Commission told the six largest banks including Industrial & Commercial Bank of China Ltd. and China Construction Bank Corp. to each offer at least 100 billion yuan of financing support in any form including mortgages, loans to developers and purchases of their bonds, said the people, asking not
to be identified discussing a private matter.
The PBOC, CBIRC, ICBC and China Construction Bank didn’t immediately reply to requests for comment.
The call is the latest in a series of actions intended to arrest a property slump that’s been weighing on the world’s second-largest economy for more than a year. Chinese policymakers have already encouraged local governments to ease curbs on home-buying, asked lenders to meet the reasonable financing needs of developers, and set up a program to provide special loans through policy banks to ensure projects are delivered.
Earlier, the central government unveiled a rare tax incentive for homebuyers. People who purchase new residences within a year of selling old ones will get income tax refunds, according to a statement on the finance ministry’s website.
Some dollar bonds of Country Garden Holdings Co., the country’s largest builder, were on pace for their biggest gains since March as they climbed as much as 9 cents, according to prices compiled by Bloomberg.
The lending target would be almost equivalent to the increase in property loans by the entire banking industry in the first half. Outstanding property loans rose 4.2% from a year earlier, the slowest pace on record, PBOC data show.
Despite regulators’ pleas, banks have remained cautious about lending to cash-strapped developers, while demand for mortgages has sagged alongside homebuyer confidence.
Apart from traditional lending for mortgages and property projects, banks are also encouraged to buy bonds issued by developers and invest in the loan program for project delivery, the people said. That initiative currently targets 200 billion yuan in loans financed by policy lenders such as China Development Bank and Agricultural Development Bank of China, Bloomberg reported in August.
A mortgage boycott has widened among angry homebuyers waiting for stalled apartment buildings to be completed. High-frequency data suggest the housing market remained weak in the first half of September, UBS Group AG said in a recent note.
Measures to support the real estate sector gathered pace this week, ahead of a twice-a-decade Communist Party congress in October. The central government allowed nearly two dozen cities to lower mortgage rates for purchases of primary residences, while the central bank vowed to speed up home building with more special loans.
A central bank-backed newspaper called for further cuts in mortgage down-payment requirements, which some market watchers consider to be badly needed for a recovery.
China has enough ammunition to salvage its beleaguered property sector, as total bailout funds could reach 3.57 trillion yuan with central government support, according to CLSA Ltd. That’s far more than the 700 billion yuan to 800 billion yuan funding gap for stalled projects, based on S&P Global estimates.