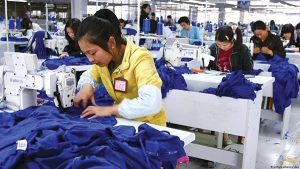 Before October, Qiang had about 30 workers in his garment factory in Guangzhou’s Haizhu, a district often dubbed the apparel manufacturing capital of China. After more than a month of Covid lockdowns, all of them have fled, bringing production to a halt.
“Those who went home are watching to see when to come back,” said Qiang, declining to provide his full name. “I need to restart production the moment the sub-district gives us the green light.”
Even as China slowly pivots away from Covid Zero by relaxing rules in key cities — partly in response to widespread public anger against the punishing regime — a web of relentless curbs continues to hamper factories like Qiang’s, many of which remain in high-risk areas subject to more-targeted but still lockdown-like restrictions. Supply chains remain strained, with larger companies struggling to keep production lines humming. A recent surge in infections has also raised doubts over the efficacy of the so-called closed-loop system, the pandemic-era hack that isolates workers in bubbles.
Easing disruption for manufacturing hubs is crucial to reviving China’s economy, which is expected this year to grow at the slowest pace since the 1970s, excluding the slump at the start of the pandemic.
Several prominent government-linked economists have recently urged authorities to shift their focus back to promoting expansion. In late October, Haizhu was locked down because of a Covid outbreak, confining workers in densely populated urban villages to cramped tenements for weeks. Clashes with authorities ensued even before the wider anti-Covid demonstrations in late November. As a way to quell discontent the government urged Guangzhou’s migrant workers to return to their hometowns, causing a mass exodus. And then, in a pivot, Guangzhou lifted broad lockdowns in most parts of the city on November 30.
The shortcomings of the closed-loop system were laid bare when irate workers at the world’s largest iPhone factory in Zhengzhou, roughly 400 miles south of Beijing, clashed with security staff, leading to chaos.
Some carmakers opted to halt output over the past month instead of deploying closed-loop systems. As Chinese cities start to move away from broad, sweeping lockdowns, Volkswagen says it has resumed operations, though production may still be impaired at “very few sites,” a representative said.