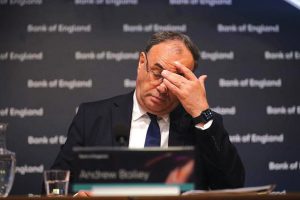 In the midst of the UK’s worst inflation crisis for four decades, Bank of England (BOE) Governor Andrew Bailey has found himself at the heart of a growing political storm.
After a little more than two years in the job, Bailey is under attack from members of the ruling Conservative Party and the press. It’s a dramatic turnaround from 2019, when newspapers hailed him as the ultimate safe pair of hands and the government called him the “standout candidate” for the role.
Bailey has recently found himself cast as a political punching bag in the race to replace Boris Johnson as prime minister. He is absorbing blame for what the BOE this week predicted will be a long recession, the highest inflation rate in more than four decades and a jump in unemployment.
That’s led to some of the most overt attacks on the bank by government ministers since the Treasury handed BOE authority to set interest rates in 1997. After delivering the biggest hike in 27 years, Bailey was branded the “banker who’s running out of credit” in the Daily Mail.
The central charge is that the BOE, and therefore Bailey himself, has failed in its key goal of controlling inflation, missing the signs of a price explosion and then acting too slowly once they began to emerge.
On that front, the facts suggest the attacks carry some weight. Inflation in the UK is currently running at 9.4%, almost five times the 2% target. The BOE’s latest forecasts now anticipate gains peaking at 13.3% in October, the highest since 1980.
And although the BOE was the first major central bank to begin tightening after the pandemic last December, that advantage has seemingly been squandered with the US Federal Reserve delivering sharper increases in borrowing costs. While economists started calling for action from BOE in middle of last year, officials were still adding to their stimulus measures in December.
Bailey has stressed that acting earlier, in the teeth of Covid uncertainty, would have led to a worse recession. He also, correctly, pointed out that much of the current bout of inflation stems from a spike in energy prices following Russia’s invasion of Ukraine — something the BOE could neither prevent nor predict.
But while his detractors have have given few specifics on when and how the BOE should have acted, and what the consequences would be, his defensive response and lack of acknowledgment of any errors has won him few friends.
Questions about political interference and accusations of being asleep at the wheel dominated Bailey’s press conference and in subsequent interviews. Those debates are starting to raise questions about the legal framework underpinning the bank’s authority.
Bailey has tried to avoid the politics of the Conservative leadership battle. But when asked he has pushed back against the idea the BOE should have anticipated the surge in inflation and acted sooner.
“I would challenge anybody to have been sitting here a year, two years ago — say there’s going to be a war in Ukraine, and it’s going to have this effect on inflation,” Bailey said.
“Given the situation we were facing in the context of Covid, in the context of the labor market, the idea that at that point we would have tightened monetary policy, I don’t remember there were many people saying that at that time.”
The problems for Bailey, who has also pledged to serve out his full eight-year term as governor no matter who takes over in Downing Street, also go beyond inflation.
In recent months, a string of high-profile gaffes have made him a regular on newspaper front pages. The most notable came in February when he said workers facing the highest inflation in decades should exercise restraint in asking for pay rises. While he has since attempted to row back on the comments, they cut through the usual economic audience and are brought up at almost all of Bailey’s public appearances.
There’s also a growing idealogical difference. Bailey’s dire forecasts are at odds with the economic boosterism that pervaded through the Conservative Party under Johnson and now forms a key plank of the pitch of his likely successor, Liz Truss.
Bailey is the second governor to find himself at odds with large parts of the Tory party. His predecessor, Mark Carney, became the target of its pro-Brexit wing, who repeatedly attacked him for being overly gloomy on his outlook for life outside the European Union.
While that was mainly confined to backbenchers — Jacob Rees-Mogg jibed that Carney was a “second-tier Canadian politician” who failed to understand his role — the attacks on Bailey are coming from sitting Cabinet ministers.
Truss, the foreign secretary, has said she wants to revisit the BOE’s mandate and explore how to ensure policy makers meet their goal to keep inflation down. Her allies have been more aggressive.
“Interest rates should have been raised a long time ago and the Bank of England has been too slow in this regard,” Suella Braverman, the attorney general and a supporter of Truss, said on Sky News.
Business Secretary Kwasi Kwarteng joined the attack, giving a series of interviews saying that the BOE should have acted earlier.
“The job of the Bank was to deal with inflation,” Kwarteng said on Sky News. “They’ve got a 2% inflation target, that’s actually their mandate. And now inflation is getting double digits. So clearly, something’s gone wrong.”