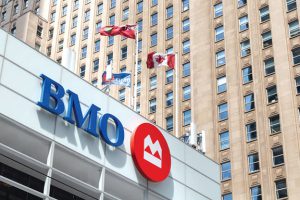 Bank of Montreal (BMO) has told its investment bankers they should go back to working from home, joining a growing list of companies vacating
offices as Covid-19 cases climb.
Canada’s fourth-largest bank instructed its North American investment and corporate banking division to resume remote work until the week of January 17, according to an email sent to staff and obtained by Bloomberg.
“This decision ensures that we’ll be returning to the office in the safest way possible after the holiday season,” the email says. The division will pause in-office testing pilot programs in Toronto and New York until mid-January, and the Toronto-based bank also said all upcoming events and dinners should be postponed or hosted virtually. A company spokesperson confirmed the memo.
Bank of Montreal’s move adds to a list of financial firms in Canada, including Ernst & Young LLP, dialling back plans to bring back workers to offices amid rising case counts and concerns about the omicron variant. Bank of Nova Scotia and Canadian Imperial Bank of Commerce both paused plans this week to return employees to offices early next year, while National Bank of Canada, which had reopened offices at 50%
capacity, asked employees to work remotely if possible.
Ernst & Young recommended that its Canadian employees work remotely if possible until the new year at the earliest, according to a note to employees. The company also asked staff meeting with clients to use their “good judgement” as to whether such events should be done in-person or virtually.
Ernst & Young spokesperson Victoria McQueen said the decision was made due to “increasing uncertainty around Omicron.”
“We are monitoring this closely and will provide additional guidance and next steps early in the new year,” McQueen said in an email.
Sun Life Financial Inc has also paused a pilot program that had brought some workers back to the office and asked those already enrolled in the program to work from home when possible.
Omicron will be the dominant variant by the end of the week in Ontario, if it’s not already, Adalsteinn Brown, co-Chair of the province’s Covid-19 Science Advisory Table, said in a news conference.