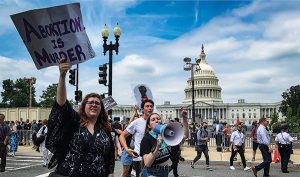 Back-to-back rulings on guns and abortion eliminated any doubt the US Supreme Court will be the transformational force Republicans envisioned when they filled three vacancies during Donald Trump’s presidency.
Less than two years after Justice Amy Coney Barrett’s confirmation just before the 2020 presidential election, the court’s conservatives laid bare their willingness to rewrite the nation’s lawbooks and upend its social and political dynamics.
They expanded gun rights Thursday by striking down a century-old New York law that limited who can carry a handgun in public.
Less than 24 hours later, they delivered what even conservative Chief Justice John Roberts called a “serious jolt to the legal system” by overturning Roe v. Wade, which had protected abortion rights since 1973.
“It is different from the ‘one case at a time’ embrace of judicial restraint — even with conservative results — that we have seen from the Roberts courts in recent years,” said Allison Orr Larsen, a professor who directs the Institute of the Bill of Rights Law at William & Mary Law School. “‘Jolt to the legal system’ is spot on.”
The gun ruling cast doubt on laws in six states — also including California, New Jersey, Massachusetts, Maryland and Hawaii —where people had to show a special need to get a carry permit.