US, Russia urge Turkey to de-escalate fighting in northern Syria 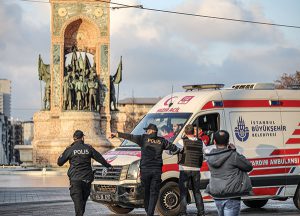 The US and Russia urged Turkey to avoid escalating violence in northern Syria as Turkey’s leader vowed a fresh incursion against Kurdish militants that could threaten existing cease-fire agreements.
Turkey over the weekend started an aerial attack on the Kurdish militia it holds responsible for a deadly bomb attack in Istanbul last week. The army may also launch a cross-border offensive to seal the border, President Recep Tayyip Erdogan said Monday, accusing the US and Russia of not fulfilling their promises to force the militants to withdraw from the Turkish border as mandated under deals reached in 2019.
“We think that work with all the interested parties should be continued in an effort to find some kind of correct resolution, including of the so-called Kurdish question,” Kremlin special envoy Alexander Lavrentyev said Tuesday, according to state-run Tass. “We hope we will be able to convince our Turkish partners to refrain from excessive use of force on Syrian territory.”
Though Russia and the US back different sides in the Syrian conflict, his comments echoed those from Washington. “We urge de-escalation in Syria to protect civilian life and support the common goal of defeating IS,” State Department Spokesman Ned Price said in a statement on Monday.
Over the weekend, Turkey bombed bases of the outlawed Kurdish PKK group in northern Iraq, as well as positions of US-backed Kurdish forces in northern Syria. The PKK, recognized as a terrorist organization by the US and European Union, has denied responsibility for the Istanbul terror attack.
Erdogan’s threat of a new assault may help him consolidate nationalist support ahead of elections next year, but if he follows through, would put him further at odds with Washington, which backs the Kurds in its fight against IS. Russia, meanwhile, has been trying for years to help President Bashar al-Assad regain control of Syria.