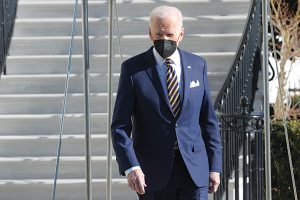 President Joe Biden said he would consider personally sanctioning Vladimir Putin if he orders an invasion of Ukraine, escalating the US effort to deter the Russian leader from war.
“Yes,” Biden said in Washington, in answer to a reporter’s question about whether he could see Putin facing US sanctions. “I would see that.”
The US rarely levels sanctions directly against heads of state. But Biden has threatened some of the most severe economic penalties the US and its allies can muster if Putin orders more than 100,000 troops massed outside Ukraine to cross the country’s border.
Kremlin spokesman Dmitry Peskov said personal sanctions on Putin would be “politically destructive” for the signal they sent but wouldn’t have any economic impact on the Russian leader, who is banned by law from holding foreign assets. Peskov said earlier such restrictions would be tantamount to breaking off relations.
The Kremlin has denied any plans to invade but has demanded concessions from Nato, including a guarantee the alliance won’t add Ukraine as a member or otherwise expand and a rollback of forces from former Soviet states.
As the US and Nato allies hold talks with Russia, Biden’s administration continues to brace for any potential invasion. That has included threatening devastating sanctions on Russia, sending weapons, ammunition and other equipment to Ukraine and preparing to dispatch 8,500 troops to Nato countries in Eastern Europe. Biden has ruled out US or Nato troops entering Ukraine itself.
The scope of potential sanctions remains unclear. European Union members aren’t in agreement with the US on how broadly to target the Russian economy.
Germany, for example, has pushed for an exemption for the energy sector if there is a move to block Russian banks from clearing US dollar transactions. Biden himself has acknowledged that some allies may disagree on retaliation if Putin stops short of an invasion but orders other hostile acts, like cyber attacks or supporting militia groups.
“As I’ve said, there are going to be serious economic consequences if he moves,” Biden told reporters during a visit to a boutique in Washington. “If he were to move in with all those forces, it would be the largest invasion since World War II. It would change the world.”
The impact of any sanctions that could be imposed on Putin is unclear. The Russian leader’s assets are a mystery, perhaps only known in piecemeal by some Western intelligence agencies. More is believed to be known about Russian oligarchs and other people in Putin’s inner circle, and those individuals could be regarded as proxies for Putin.
In a series of leaked documents and reported by the Guardian last year, investigators sought to track the wealth of some people believed to be close to Putin. But pinning specific assets or bank accounts on the Russian leader has proved difficult.
Officially, Putin owns hardly any assets. His annual income is about 10 million rubles, and he owns three cars and an apartment, according to his latest financial disclosure. Peskov said he continues to receive his official salary at Bank Rossiya, which is already subject to sanctions. The Kremlin earlier warned that a US move to put about 8,500 troops on alert for rapid deployment to Europe “exacerbates tensions” in the region. Biden told reporters that the troops may begin moving soon.
“I may be moving some of those troops in the nearer term, just because it takes time,” Biden said, adding it’s not “provocative” to do so. “If you notice, you don’t see a lot of concern in terms of their security, about any of our NATO allies in Western Europe, but in Eastern Europe, there’s reason for concern.”