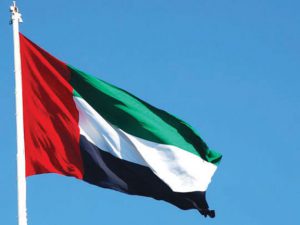 The UAE has condemned the Houthis’ seizure of a UAE-flagged civilian cargo ship in the Red Sea as an act of piracy during a United Nations Security Council meeting on the situation in the Middle East.
The civilian cargo vessel, known as the Rwabee, was seized by the Houthis on January 3. Several Security Council members also condemned the ship’s seizure at the meeting. Numerous countries and organisations have issued statements condemning the Houthis’ seizure of the Rwabee.
“We condemn, in the strongest terms, the Houthi act of piracy against the civilian cargo vessel ‘RWABEE’ off the port of Hodeidah,” said Lana Nusseibeh, Permanent Representative of the UAE to the UN. “This is a dangerous escalation against the safety of maritime navigation in the Red Sea. It requires the adoption of a firm position by the Security Council. We thank all countries who have issued statements condemning this act of piracy.”
Ambassador Nusseibeh emphasised that making progress in ending the crisis in Yemen will not be possible until Houthi militias cease hostilities and repeated violations against the Yemeni people. She also strongly condemned the Houthis’ attempt to target the Kingdom of Saudi Arabia’s territory using drones and ballistic missiles as a
flagrant violation of the international law.
Ambassador Nusseibeh further stressed the importance of Yemenis coming together to reach a consensus, unifying the Yemeni people in line with the Riyadh Agreement, and prioritising Yemen’s national interest to serve the aspirations of its people.
She also welcomed the Yemeni government’s recent efforts to improve the economy and noted that the
UAE looks forward to developing solutions that contribute to the economy’s advancement.
Ambassador Nusseibeh also called for intensifying international efforts to respond to the Yemeni people’s humanitarian needs.