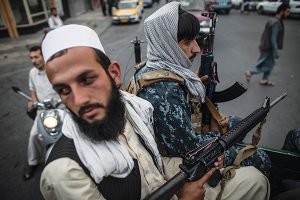 Top Taliban officials didn’t know al-Qaeda leader Ayman al-Zawahiri was hiding in Afghanistan, a spokesman said, and an investigation is underway to check the veracity of US claims he was killed in an American airstrike in the capital Kabul over the weekend.
“The government and the leadership wasn’t aware of what is being claimed,” Suhail Shaheen, the head of the group’s political office in Doha, Qatar, said over WhatsApp messages. There was “no trace” of his presence, Shaheen added.
The Taliban government is investigating the matter, he added, and will share its findings. The group has already condemned the American airstrike saying it violated Afghanistan’s sovereignty and the 2020 Doha agreement, which resulted in the withdrawal of US troops from the country after 20 years of war. The Taliban took over shortly before the exit was completed.
President Joe Biden announced Zawahiri’s killing Monday evening. US administration officials said the Taliban government was not notified in advance of the strike that involved several months of intelligence work.
Secretary of State Antony Blinken said this week the Taliban had violated “repeated assurances to the world that they would not allow Afghan territory to be used by terrorists to threaten the security of other countries.”
The Taliban’s chief spokesman Thursday again refuted claims that Afghanistan posed a threat as a source of terror activity.
“There is no danger to anyone, including America, from the soil of Afghanistan,” Zabihullah Mujahed said in a Twitter post. “The Islamic Emirate wants to implement the Doha Agreement and the violation of the agreement must end.”
If Afghan territory is violated again “any consequences will be on the responsibility of the United States,” the statement said.
Zawahiri was instrumental in the planning of the 9/11 attacks on the US and Washington has said was the “mastermind” behind multiple attacks against Americans.