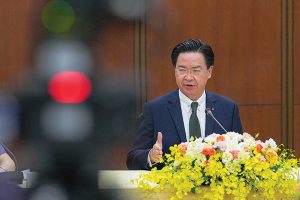 Talks between the leaders of China and the US were good for peace in Asia-Pacific, Taiwan Foreign Minister Joseph Wu said, underscoring how tensions in the region have eased in recent weeks.
“The kinds of messages coming from the United States this time, we feel rather comfortable about the meetings,” Wu said Tuesday at a briefing in Taipei before island-wide elections.
Officials in Washington and Taipei have been in touch since US President Joe Biden met Chinese leader Xi Jinping on Nov. 14 at the Group of 20 summit in Indonesia, Wu said, adding: “We remain in communication with the United States.”
In their first in-person meeting since the Covid-19 pandemic began, Xi and Biden agreed to a series of gestures aimed at improving ties. The leaders of the world’s two biggest economies said they would also resume talks on issues including climate change and economic stability. National Security Advisor Jake Sullivan had promised the US would brief Taiwan on the Xi-Biden meeting.
Beijing broke off many routine contacts with Washington after Nancy Pelosi in August became the first sitting speaker in 25 years to visit Taiwan, which China considers part of its territory. The People’s Liberation Army held unprecedented military drills around Taiwan after the visit, launching missiles over the island.
Even before those exercises, China had been ramping up military, economic and diplomatic pressure on Taiwan. In November last year, Beijing said it was sanctioning top officials in Taipei including Wu, accusing them of “fanning up hostility across the Taiwan Strait.”
The punishments included bans on travel to the mainland, though they would likely have little practical effect because the officials are unlikely to ever go there.
Beijing has also been alarmed at Biden’s repeated comments that the US would militarily defend Taiwan in case of attack, an apparent shift in policy after decades of what was called “strategic ambiguity.” Biden officials have said the American approach remains unchanged and accuse China of changing policy by ramping up military exercises.
Wu said at the briefing Wednesday that what Biden conveyed to Xi “was that United States opposes any unilateral changes to the status quo.”
“In other words, the United States opposes the way that China has been threatening Taiwan,” he said. “I think the US position is rather strong in this regard.”