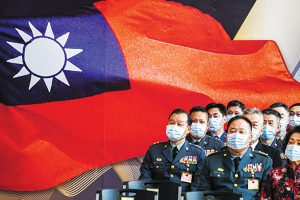 Taiwan is bracing for more Chinese military patrols in 2022, after People’s Liberation Army (PLA) incursions more than doubled this year, fuelling concern about a clash between the region’s big powers.
Chinese warplanes have made some 950 forays into Taiwan’s air-defense identification zone since January, according to Bloomberg-compiled data from the Ministry of National Defense in Taipei. That compares with about 380 sorties the prior year, when the ministry began releasing the data amid a sharp rise in such flights.
Tensions could rise further in the coming year, with key events on the political calendars for both Beijing and Taipei. Not only is Chinese President Xi Jinping heading towards a party congress in which he is expected to secure a precedent-busting third term in power, Taiwanese leader Tsai Ing-wen is facing elections viewed as a bellwether for the next presidential race.
“China will send more military airplanes into Taiwan’s ADIZ next year with more intimidating operations,” said Kuo Yujen, director of Taiwan’s Institute for National Policy
Research. “The situation in 2022 is worth being concerned about as it’s going to be a turning point.”
The political events increase pressure on Xi and Tsai to show strength and the resolve to respond to perceived provocations. President Joe Biden, who has affirmed the US’s commitment to defend Taiwan from any Chinese attack, also has a political incentive to maintain
a firm line toward Beijing before congressional mid-term elections.
China’s ruling Communist Party considers Taiwan part of its territory, even though it has never controlled the island. Washington cut formal ties with Taipei more than four decades ago but has never taken a position on the island’s sovereignty and continues to maintain arm sales and other informal ties.
Biden signed a $768.2 billion annual defense policy bill for 2022, the White House said in a statement. The bill says the US should maintain the capacity to resist “the resort to force by the People’s Republic of China to invade and seize control of Taiwan” as a “fait accompli” before Washington can respond effectively. Taiwan recorded the largest number of Chinese incursions in October, when both sides were holding national day celebrations and the US and its allies conducted a series of naval exercises in nearby waters. That included 56 flights in a single day on October 4, the biggest daily count on record.
Besides the increase in number, China has used the flights to demonstrate an expanding variety of hardware, including long-range bombers, electronic-warfare fighter jets, refueling tankers and radar planes, and its ability to project power past Taiwan and near its outlying islands. The patrols have also put added strain on Taiwan’s air-defense systems and given the PLA intelligence about how Taipei would respond to an actual attack.
Still, China has over the past year avoided more provocative actions, such as crossing the unofficial median line that divides forces on either side of the Taiwan Strait or even flying over the island, as state media has threatened. Taiwanese Defense Minister Chiu Kuo-cheng told lawmakers in October that the closer Chinese planes came to the island, “the stronger we will hit back.”
The overall state of US-China relations could also determine how many sorties the PLA flies into Taiwan’s air-defense zone. Although the incursions have slowed since Biden and Xi agreed to hold their first video summit, the two sides continue to trade barbs over Washington’s overtures to Taipei and Beijing’s efforts to ramp up pressure on Tsai’s government.
“China’s quasi-military means are part of its gray-zone tactic to intimidate and coerce Taiwan — it’s a hybrid threat,” said Ou Si-fu, research fellow at Taiwan’s Institute for National Defense and Security Research, citing other efforts including luring Taiwan’s diplomatic allies away and economic coercion. “China’s activities in the strait will increase as its competition with the US intensifies.”