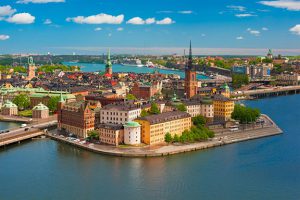 A drop in Swedish apartment prices picked up speed last month, adding to evidence that the property market in the largest Nordic nation is floundering.
The average cost was 4% lower in July than the previous month, marking the fastest decline since before the pandemic, according to data by Svensk Maklarstatistik. House prices decline 1 percent from June.
The data underscores the challenge facing the Riksbank as it confronts the fallout of its efforts to cool the economy and bring inflation under control. Officials have doubled the pace of their interest-rate hikes at a time when Swedes face the largest price increases for consumer goods in three decades.
While property markets boomed elsewhere during the pandemic, the debts of Swedish households ballooned at a pace exceeding any from the Group of Seven economies. Riksbank Governor Stefan Ingves once likened that predicament to “sitting on top of a volcano.”
SEB’s Swedish housing-price indicator, a key gauge of property market, fall to the lowest level since the global financial crisis, data showed earlier this week.
The Riksbank expects housing prices in Sweden to drop 16 percent by the end of 2023, according to its June monetary policy report.
The monthly decline in apartment prices in the capital area accelerated to 5 percent, with the drop on a three-month basis swelling to 10 percent.
House values in the Stockholm region have now fallen as much as 6 percent, based on three-month average.
From a year earlier, apartment prices slipped 2%, while for houses, they grew 1%.