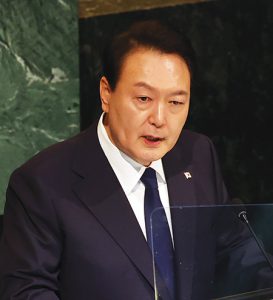 South Korean leader Yoon Suk Yeol was overheard insulting American lawmakers, after briefly meeting President Joe Biden to discuss issues including US electric-vehicle subsidies that South Korea wants to change.
“What an embarrassment for Biden, if these idiots refuse to grant it in Congress,” video broadcast on South Korean television showed Yoon telling Foreign Minster Park Jin in New York. The comments were caught on a microphone as Yoon and Park were leaving a brief chat with Biden at a Global Fund event.
The two leaders had been scheduled to hold formal discussions on the sidelines of the UN General Assembly this week and instead had a chat at the event for the charity that raises money to fight infectious diseases.
A senior South Korean presidential office official said that Yoon’s comments were unofficial and unverified.