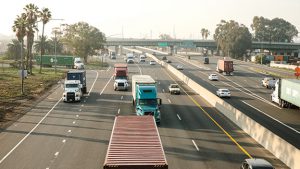 President Joe Biden’s sweeping infrastructure law was supposed to ease problems for the trucking industry and relieve supply chain woes, but the law overlooked a vital necessity for truckers: Parking.
Overcrowded truck stops force drivers to often spend hours scavenging for parking wherever they can find it, even in illegal and unsafe spots. The problem has simmered for decades, as transportation has been overwhelmed by the online shopping boom, lower inventories and federal mandates on driver rest. But truckers say the coronavirus pandemic has brought the issue to a breaking point.
The word “parking” doesn’t appear anywhere in the Biden administration’s 2,333-word “Trucking Action Plan” released last month as part of the rollout of the new infrastructure law during the height of the pre-holiday emphasis on supply-chain snags.
While the Biden administration is focused on congestion at coastal ports and a broader truck driver shortage, the lack of safe and legal parking spaces for rigs also causes ripples throughout the supply chain.
Government regulations typically force drivers off roads to take 10-hour breaks after driving 11 hours. Precious time spent searching for parking means lengthier delivery times to stores.
“The supply chain clog will not unclog until drivers are able to utilize their whole 11-hour drive time driving, not driving around in circles, fighting for the next parking spot or stopping early so they can maybe count on a spot,” Merry Leach, a driver from Niota, Illinois, told transportation officials last month. “Adding truckers to fill the ‘driver shortage’ is only going to make the situation worse, like adding players to a game of musical chairs without adding chairs.”
Leach, now 72, wasn’t ready to retire, but said she’d had enough last year. She quit and sold her truck out of frustration.
Finding a legal spot often means shortening the day. And that means a smaller paycheck and delays in deliveries. “If you don’t find a spot by 2 o’clock in the afternoon, you’re done. You’re not going to find a spot, particularly in the Northeast,” Leach said.
Most companies don’t reimburse drivers for parking, and over-the-road truckers get paid by the mile, not the hour. That means an early exit to grab an available spot — an average of 56 minutes early, according to a 2016 study of trucker diaries — costs drivers an average of $4,600 a year, or 10% of their annual pay.
Pandemic-related closures of rest areas in 2020 made parking the most critical issue for commercial truck drivers in a survey that year. It’s now tied with compensation as their top concern.
The American Transportation Research Institute found that 48% of drivers said they aren’t willing to pay to park; only 10% say they would pay more than $10. Overnight parking at Pilot Flying J Inc. truck stops near Tulsa, Oklahoma — the most-searched city in its online reservation system — ranged from $12 to $26.
Last month, the Federal Highway Administration asked for public input on how to best implement the infrastructure law, and truck parking was a top complaint.
Without additional funding from Congress, the infrastructure bill simply asks each state to assess its truck parking needs.
The problem is most pressing in the Northeast. Outside of Hawaii, which doesn’t have long-haul routes, the states with the fewest spaces per truck mile travelled are Massachusetts, Maine, Tennessee, Connecticut, Delaware and New York. Drivers say staging just outside of metropolitan areas is key to making narrow pick-up and delivery windows.
The Federal Highway Administration says the biggest need is within 20 miles of urban areas. Local zoning laws and not-in-my-back-yard political pressure have constrained new parking in suburban areas where it’s most needed, business leaders say.
“That’s why the federal government needs to be involved. We don’t see it as a competition between the public and private sector,” said Ed Mortimer, the US Chamber of Commerce’s vice president of Transportation and Infrastructure. “There is definitely a role for the private sector to do this. We need both.”
A pilot program in Midwestern states tries to solve the problem with technology: Real-time highway signs showing the number of spaces available at upcoming truck stops, with the data also fed to smartphone apps. The Biden administration says it hopes to build on those solutions while encouraging states to pay for more parking.
“Truck drivers need safe areas to take a break from long stretches of highway miles. We have heard several personal accounts of the need for additional truck parking,” said Meera Joshi, the former acting administrator of the Federal Motor Carrier Safety Administration, in a statement. She said formula grants to states could pay for truck parking projects, but those decisions are up to states.