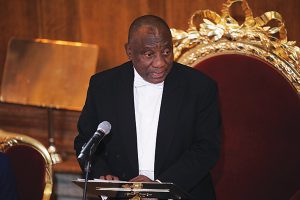 The findings of an advisory panel set up by South Africa’s parliament to probe whether there are grounds for lawmakers to take action against
President Cyril Ramaphosa
in connection with a scandal over a robbery at his game farm was expected to be published on Wednesday.
Chief Justice Sandile Ngcobo, who headed the three-member panel, handed the report over to Nosiviwe Mapisa-Nqakula, the Speaker of the National Assembly, in Cape Town. The report will be published through a parliamentary notification, she said.
South Africa’s legislature usually announces its daily
Announcements, Tablings and Committee Reports after 5 pm The panel’s report is set to be debated by lawmakers on December 6, and they will decide whether or not to adopt it.
The furor erupted in June when Arthur Fraser, the former head of South Africa’s national spy agency, laid charges against Ramaphosa, alleging that he sought to cover up the 2020 theft of more than $4 million from his Phala Phala game farm. Parliament set up a three-member panel to decide if there are grounds for lawmakers to take action against the president and it is due to deliver its findings to the legislature.
The president has admitted that money he made from selling animals was stolen, but far less than Fraser alleged, and has denied doing anything wrong. He’s refused to publicly answer questions about what happened, and opposition parties say they want clarity on whether he violated tax or exchange-control rules.
The Hawks, a special police investigative unit, and the nation’s graft ombudsman, have instituted separate probes of the matter.