Russia says US talks at dead end, but still hopes for more 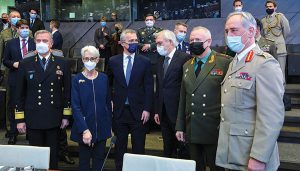 Talks this week on Moscow’s demands for security guarantees from the US and its allies are at “a dead end,” a senior Russian diplomat said, stepping up the pressure on the West even as he and other officials held out the prospect of more diplomacy to ease tensions.
“The US and its allies in effect are telling us ‘no’” on Russia’s key proposals, offering further discussions only on “secondary” matters, Deputy Foreign Minister Sergei Ryabkov told RTVi television. “That’s the dead end or difference in approaches.”
The ruble flipped to losses after the statement, trading down 0.8% at 75.32 per dollar as of 3:08 pm in Moscow, the worst performance on the day in emerging markets after the Turkish lira. Bond yields rose, with the rate on 10-year ruble debt adding 15 basis points to 8.90%, the steepest increase on a closing basis since November 22.
The comments by Ryabkov, who led the talks with the US in Geneva on Monday, seemed to reflect a slight hardening of Russia’s position as he said he didn’t see reason to resume discussions in the near future. But shortly after he spoke, his boss, Foreign Minister Sergei Lavrov, seemed more upbeat, telling state television he expects the US and its allies to respond to Russia’s proposals as soon as next week.
The mixed messages suggested the Kremlin is keeping up the pressure on the US and its North Atlantic Treaty Organization allies that started with a buildup of tens of thousands of troops on the border near Ukraine. Moscow has so far rejected western calls to pull those forces back, saying it has no plans to invade.
The US and Europe have threatened to impose painful new sanctions on Russia if it does invade. In an effort to get the Kremlin to back down, the US agreed to this week’s talks on Russia’s demands for security guarantees.
Though the meetings yielded no progress on Russia’s most sweeping demands — a promise by Nato not to expand further toward its borders, not to deploy offensive weapons there and to remove forces from eastern Europe — they did bring western offers to negotiate on lesser issues that Moscow had long sought to discuss, such as limits on missiles in Europe.
“No one was even thinking about talking about this before,” said Fyodor Lukyanov, head of the Council on Foreign and Defense Policy, which advises the Kremlin. “The West’s fixation with Ukraine stimulates Russia to action: ‘Since you react so strongly, then we’ll be poking you there.”’ Ryabkov Thursday kept up weeks of vague threats of potential military measures Russia might take in the event the talks fail, even hinting it could send warships or other military assets to Venezuela or Cuba.
The campaign of threats has alarmed some European capitals, fueling calls for more diplomacy.
“Now is the time to use all available formats for talks,” German Defense Minister Christine Lambrecht said Thursday in an interview with Inforadio. “It’s a painstaking and very strenuous journey but it’s the right way if we want a peaceful solution.”
In Vienna, diplomats at the Organization for Security and Cooperation in Europe continued the discussions of Russia’s security demands Thursday. “We’ll see if Russia is prepared to engage on that,” US Secretary of State Antony Blinken said Thursday on MSNBC of US offers of more talks. “If it is, if it does, then I think we can resolve this peacefully without conflict, and that’s clearly preferable for everyone.”