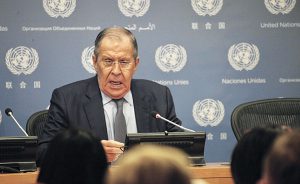 Grilled by reporters at the United Nations General Assembly about what comes next in Russia’s invasion of Ukraine, Foreign Minister Sergei Lavrov had simple advice.
“You should read Putin more often and carefully,” he told a journalist who asked about Moscow’s endgame for the seven-month-old conflict, directing the questioner to Putin’s speeches for guidance. The Russian president’s public comments haven’t outlined clear goals for the operation.
Questioned repeatedly whether Russia may use nuclear weapons to defend the occupied parts of Ukraine it’s moving to annex, Lavrov provided no additional clarification.
Vladimir Putin drew condemnation from leaders of the US and European countries for comments Wednesday suggesting Russia would use “all available means” to defend the areas once it declared them part of its territory. The Kremlin is staging ”referendums” in the areas that the UN has denounced as illegal, and a state news agency reported Saturday that annexation could take place as soon as next week.
But when asked to clarify whether Putin’s comment meant Russia will be prepared to use nuclear weapons to defend the annexed areas — territory that Ukraine has vowed to retake militarily — Lavrov went into a long discussion of “cancel culture” with regard to Moscow’s version of the conflict.
“All the territory of the Russian Federation, that’s included and may be included in the Constitution, is unconditionally under the full defense of the state,” was as specific as he would be. “All laws, doctrines, concepts and strategies of the Russian Federation cover all its territory.”
Lavrov said Moscow’s ready to negotiate with the West but won’t take the initiative. “It’s always better to talk than not to talk,” he said. “But in the situation we find ourselves in, Russia simply isn’t going to make any first steps.”
Switching freely between Russian and English, the former Russian ambassador to the UN lectured the packed press room for about an hour. He lambasted the US and its allies for what he claimed were years of “egotism” and defended Moscow’s line, often lecturing impatiently.
But asked whether China is pressuring the Kremlin to end the war soon, Lavrov first argued with the reporter’s choice of words and then was unusually direct. “Tell your readers that I avoided the question.”

President Joe Biden’s administration has privately told the Kremlin that any use of nuclear weapons in the war in Ukraine would have “catastrophic consequences” for Russia, White House National Security Adviser Jake Sullivan said.
Russian President Vladimir Putin renewed his warnings of a nuclear threat last week as he mobilized hundreds of thousands of reservists after Ukrainian forces recaptured a swath of Russian-occupied territory. Those nuclear threats are “a matter that we have to take deadly seriously,” Sullivan said in an interview with CBS’s “Face the Nation” for broadcast on Sunday.
“We have communicated directly, privately at very high levels to the Kremlin that any use of nuclear weapons will be met with catastrophic consequences for Russia, that the US and our allies will respond decisively, and we have been clear and specific about what that will entail,” Sullivan said.