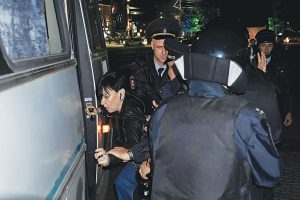 Russian President Vladimir Putin’s move to draft in 300,000 reservists to reinforce his troops in Ukraine is likely to extend the war rather than influence its outcome.
Still, it could buy him time to execute a wider strategy — including exacerbating Europe’s energy crisis and threatening a nuclear strike on unspecified targets— aimed at undermining foreign military and financial support for Kyiv’s war effort.
Everything about Putin’s decision to order a partial mobilization is surrounded by questions, including the feasibility of the number itself. Other unknowns include the speed, quality and goals of a mass training exercise that’s about to begin.
But basic math suggests the phased recruitment program will prove to be more about rebuilding capability and rotating exhausted combat troops, than providing a fresh force capable of throwing Ukraine back onto the defensive, say military analysts from Washington to Moscow.
Not only has Russia lost about 80,000 soldiers dead or wounded in Ukraine, according to estimates by Kyiv’s allies, but with insufficient manpower for rotation many troops are now spending their eighth month in the field. “I’m not sure this amounts to an escalation, but it does extend the time it will take for Ukraine to win,” said Igor Levchenko, head of strategic modeling at New Geopolitics, a Kyiv based think tank. And that could be significant.
One of Russia’s few strategic successes has been to slow the supply of weapons from the US and other allies to Ukraine by threatening escalation, with delivery of each arms system — from Javelin anti-tank missiles to HIMARS multiple launch rocket systems — delayed by fears its transfer might provoke a Russian response, according to Levchenko.
Armed with the long range ATACMS rockets the US has balked at supplying, along with aircraft and Abrams tanks, Ukraine could recover its lost territory in weeks, according to Levchenko. Those weapons are being withheld as “a direct result of the strategic thinking of Russia’s politicians and military,” he said, adding that Putin’s recent nuclear threat risks extending hesitation in Washington. “That is a very bad story for Ukraine.”
The US continues to focus on open and clear talks with Ukraine and its other allies on its needs, including more medium and long-term weapons requirements, according to Pentagon spokesman Brigadier General Patrick Ryder. “I don’t see those conversations being impacted by this situation,” he said, referring to recent steps by Russia including sham votes starting Friday in territory it holds in Ukraine on annexation.
The US will look “at a variety of capabilities in the days ahead,” he added, in response to a question on whether America could yet send Abrams tanks. For now there’s been no shift in position among Ukraine’s allies or their support for Kyiv’s counteroffensive, according to a European official, who asked not to be identified, although they indicated that could change.
Before Putin’s speech, governments in Western Europe had seemed more concerned than those in the east about a nuclear threat. But many who thought he was bluffing also didn’t expect him to take the political risk of mobilizing, and the result could be more concern across the board as to what the Russian leader is willing to do, the official said.
Military analysts outside Ukraine also expressed skepticism at the capacity of Russia’s partial mobilization to transform the war’s trajectory on the ground.