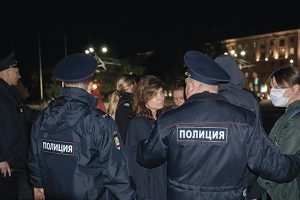 President Vladimir Putin’s order to call up as many as 300,000 reservists to fight in Ukraine triggered alarm and scattered demonstrations as Russians were forced to confront the reality of the deadly conflict.
Police detained about 1,400 people at protests against the order in 38 cities Wednesday night, according to the OVD-Info monitoring group. Some of the male detainees were handed draft notices, while protesters may face criminal charges under the harsh laws against criticism of the war the Kremlin has imposed since the Feb. 24 invasion. Some university students who joined the demonstrations were threatened with expulsion, which could annul draft exemptions.
For millions of Russians who’ve been largely shielded from the reality of the Kremlin’s bloody seven-month war, Putin’s speech early Wednesday announcing a “partial mobilization” came as a shock. The authorities provided few details of how the order, which is the first in Russia since World War II, will be implemented and who will get drafted.
Regional governments quickly began issuing orders for reservists — a huge category covering people who served as conscripts, contract soldiers, and part-time officers — to prepare to be summoned and banning them from leaving the area, according to Pavel Chikov, a lawyer who advises on conscription cases. Doctors in Moscow also received mobilization notices, he said on Telegram.
Finland’s border service reported a 50% surge in car traffic overnight, but said volumes were still below typical weekend levels. Google data showed a surge in search requests for “how to leave Russia” and even “how to break an arm.” Social media were flooded with reports of spikes in airline ticket prices.
“One of the consequences of mobilization will be the fact that the apolitical and passive population will be trawling the Internet and social media to search for answers over mobilization,” Tatiana Stanovaya, founder of the R.Politik research group, said on Telegram. “And they’ll find them not where the Kremlin wants them to, and not just information about how they’ll be drafted.”
Putin’s “major problem is his confidence that the people support him by default because he’s a leader who’s doing the right thing in the national interests,” she added.